Greg Mankiw tipped me off to a report by David R. Henderson about where the benefits of minimum wage go. Highlights?

At an aggregate level:

Now here’s the tricky question: do middle class voters know that this policy is going to benefit them by a roughly 10:1 ratio? I’m skeptical that they are that well-informed, but you can’t argue that a program like the Earned Income Tax Credit would actually do a lot more good for the people who need it most, and yet President Obama chooses to go with minimum wages and all my gullible left-leaning friends1 go right on along with it.

I think the old rule probably applies2, but I also have a hunch there’s got to be more to it. The middle class capture of welfare programs (to the detriment of their intended recipients) seems too comprehensive to be chalked up to random chance. Maybe the problem is simply that what you can understand enough to support you can also understand enough to co-opt? It’s depressing no matter how you look at it. 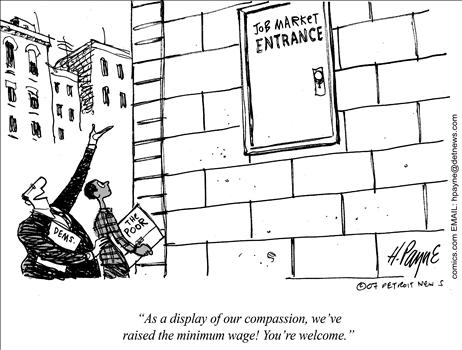 2 thoughts on “More About How Dumb Minimum Wage Hikes Are”