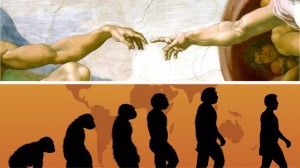 I’ve mentioned debates over evolution before, largely based on one of Nathaniel’s T&S posts.1 One of Nathaniel’s criticisms of typical polls (specifically the one by Pew Research) is the questions’ wording. Sociologist Jonathan Hill has recognized this as well and introduces in a recent piece in Christianity Today a new nationally representative survey called The National Study of Religion and Human Origins (NSRHO). The new poll asked about the following three propositions:

Hill explains that only “14 percent affirmed each of these beliefs, and only 10 percent were certain of their beliefs. Furthermore, only 8 percent claimed it was important to them to have the right beliefs about human origins…Nine percent believed humans evolved and that God played no part in the process, six percent held these beliefs with certainty, and less than four percent said their beliefs were important to them personally.”

“If only eight percent of respondents,” he continues, “are classified as convinced creationists whose beliefs are dear to them, and if only four percent are classified as atheistic evolutionists whose beliefs are dear to them, then perhaps Americans are not as deeply divided over human origins as polls have indicated. In fact, most Americans fall somewhere in the middle, holding their beliefs with varying levels of certainty.”

Check out the entire piece.