Back in November, Nathaniel had a Times & Seasons post based on a survey from Pew Research. The survey looked at beliefs regarding evolution across various religious denominations. Yet, Nathaniel pointed out that the survey isn’t really about evolution. “It’s basically a roll call to see where  people stand on the perceived cultural war between religion and science”: 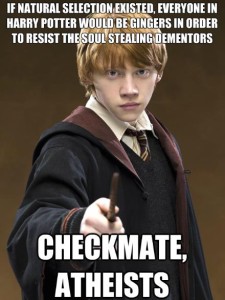 Folks who embrace strong, anti-scientific rhetoric are flaunting their disregard for the world’s estimation of their IQ and burnishing their loyalty for all to see. They are signalling to their fellows, yes, but it’s more than that. They are enacting a narrative of persecution and using the scorn that comes their way to validate their sense of importance and role in a larger narrative. The folks on the other side of the fence, those who mock the anti-science crowd, are displaying their sophistication and cosmopolitan nature. Once again, they are signalling to their fellows and strengthening social bonds, but they are also paying the cover charge to see themselves as participants in some grand endeavor. Instead of taking the role of a stalwart band of besieged disciples, however, they are playing the part of foot soldier in the ongoing march of progress. Mocking those who seem ignorant is a cheap price to pay for feeling like you’re part of the rising tide of enlightened reason. (Especially if you bear the burden of a near total lack of relevant scientific expertise.)

This astute observation from Nathaniel has some backing from the Cultural Cognition Project at Yale Law School. Dan Kahan, Elizabeth K. Dollard Professor of Law & Professor of Psychology at Yale Law School, has a couple posts demonstrating that “”believing in evolution” is not the same as “understanding” or even having the most rudimentary knowledge of science knows about the career of life on our planet. Believing and understanding are in fact wholly uncorrelated.”

Turns out the scientific beliefs of the public actually end up being cultural beliefs; markers along political divisions with no basis in scientific literacy. Eye-opening stuff. Give it a read.