Not long ago the Internet was aflame with the story of how a young, 7-year old boy and his family were desperately asking a pharmaceutical company to give him the drug he needed to survive, and were being denied. The company relented in the end, but to me it seemed that most of the Internet’s attention had already skipped on to new heart-wrenching, outraging, or hilarious stories.

Fast news stories of the Internet are the intellectual equivalent of fast food. We crave their artificial flavors with Pavlovian desire, but in the end they pass through us undigested. We are let empty and undernourished, our minds fat and heavy instead of lean and strong. Let me give just one gruesome example. Earlier this month, a woman drove her minivan into the ocean with three children inside. Luckily, they were rescued, but even the earliest stories that I read quoted the children as saying “Our mommy’s trying to kill us, please help.” Subsequent reporting included quotes from the woman’s sister that she had been talking about demons and eyewitness testimony that sh had intentionally driven the van into the ocean. That didn’t stop GodVine from publishing a video of the rescue with this description:

Beach patrol and Good Samaritans rushed to rescue a pregnant mom and her three children who were trapped inside. The heroes narrowly avoided being pulled under the water themselves! 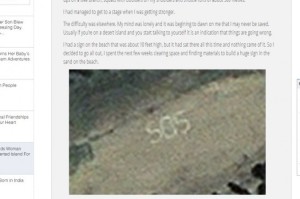 I know we like to harp on about how bad it is to focus on only negative news, and I get that, but it’s also pretty repugnant to package a macabre story of woman attempting to murder her children as just more feel-good clickbait. Slow down, people, is all I’m saying. Those hoaxes you keep posting (the SOS / Google Earth one has been making the rounds) don’t just  make you look dumb. They are a symptom of vacuous thoughtlessness and emotion-craving that is worse than merely stupid.

So what happened to the young boy who needed the life-saving treatment? If you cared enough to read it the first time, maybe you ought to care enough to actually learn about it. CNN reports that, after getting the drug, he is starting to recover. The headline is cheerful and the first paragraph is upbeat (“After just three doses of an experimental drug, Josh Hardy — whose parents had to launch a media campaign to get him the medicine — is sitting up, doing homework and playing board games with his brothers, his mother said.”) but if you read to the end of the article the package of the feel good story start to unravel.

Now that Josh is taking brincidofovir, he’s no longer taking the other drug that hurt his kidneys, but the damage was done: His kidneys still aren’t working and he has to undergo dialysis three times a week. His mother worries he might be on dialysis the rest of his life… As recently as last month, Josh had a “go get ’em” attitude about fighting his illness, his mother says. But now, even though he’s getting better, she says he seems to be exhausted after months of being sick and lacks motivation.

My heart goes out to Josh Hardy and his family. I’ll be saying prayers for them tonight, and it’s literally the least I can do. But that’s just my point: his family’s struggle to keep their son alive deserves to be treated better than  just the attention-point-of-the-minute for our ADHD culture. First we read the story of the evil pharma company and we’re angry. Then we read that the evil corporation caves to humanity and we expect or even demand that a happy ending follow. And so, if you don’t read between the lines of the CNN coverage, that’s what we get.

Of course, the first half of the story was also a complete invention. Far from being some nefarious big corporation, the company that is making the drug has 50 employees and has never made a profit. They were overwhelmed by requests for compassionate care to the point where they worried that they would be delayed getting the drug to market, a drug that could help 50,000 people in the US and another 55,000 in the EU. Furthermore, compassionate care cases run the risk of skewing the results of the trial, meaning that a potentially life-saving drug could be delayed or even rejected by too many compassionate care cases. Forbes covered the story in more detail (here and here) explaining the very real ethical quandary and the risk of setting a precedent by giving the drug. What’s the solution? Well, no one knows and–frankly–no one cares. Folks were only interested in the story of Josh Hardy’s struggle to stay alive in the same way that they are interested in who wins The Voice or American Idol or whatever.

Look, I think The Bachelor and Real Housewives and most reality TV is stupid and at least a little sick, but at least that stuff is designed as entertainment. You want to get into Survivor? Whatever, that’s your thing. But I just think people ought not to contribute to spreading stories that trigger outrage on social media if they don’t actually take the time to do basic research first. It’s not harmless. It’s delusional and divisive. And we can’t blame this nonsense on Big Media or politicians or anything like that. This is something we do to ourselves. And we need to stop.

So here’s the rule I recommend folks to try to live up to on their own: if you didn’t spend 5 minutes on Google learning about it, don’t share it.

Unless it’s about kittens or other cute animals. I am human, after all.

3 thoughts on “Young Boy Gets Life-Saving Experimental Drug, Now What?”