We’ve written critically about the proposal to raise the minimum wage here at Difficult Run before. (Quite a lot, in fact.) In one of the first pieces I wrote back in February I pointed out that there are basically three criticisms of the minimum wage hikes.

The minimum wage is not the most evil policy in the history of the world, obviously, but I really loathe it because it’s so obviously a bad idea and therefore the only reason it gets advanced is either because politicians are negligent or are intentionally exploiting public ignorance about how bad of a policy it is. If we can’t stop a policy like minimum wage, what hope do we have of rational policy in general?

There’s one more aspect to the debate, however, and that is the fact that as the price of human labor raises, the likelihood of replacing their jobs with robots increases as well. That’s the gist of a new post from Nate Silver’s 538 website: The Shift From Low-Wage Worker to Robot Worker. The article covers recent research by economists trying to see which jobs are most vulnerable to being replaced by robots. The short version? Millions of low-wage jobs are incredibly vulnerable to being replaced by robots. 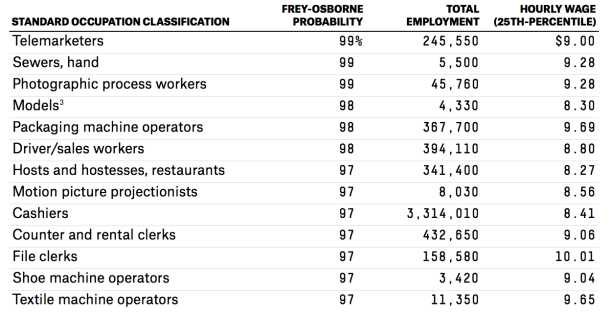 These probabilities are estimated over a 20-year window, but the trend is clear: millions of American jobs are at risk of automation. In the long run, this is a good thing. In the long run, we don’t want anyone to have to do dull, repetitive, simple work just to put food on the table. In the long run, it would be great if all people worked relatively complex jobs that required minimal physical pain and injury and maximal creativity. The question is how we transition from where we are now. We need a gradual transition accompanied by ample educational opportunities. What we absolutely do not need is an artificial increase in the price of labor. Raising the minimum wage might be good politics, but it’s absolutely terrible policy. In addition to the three problems noted above, it can only serve to make the transition more rather than less gradual.