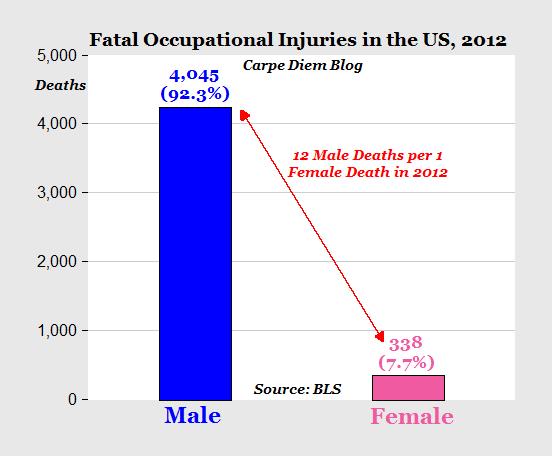 Economist Mark Perry has a rather different take on the gender wage gap:

Economic theory tells us that the “gender occupational fatality gap” explains part of the “gender pay gap” because a disproportionate number of men work in higher-risk, but higher-paid occupations like coal mining (almost 100 % male), fire fighters (96.6% male), police officers (84.8% male), correctional officers (72% male), farming, fishing, and forestry (77.3% male), roofers (98.5% male) and construction (97.5% male); BLS data here. On the other hand, a disproportionate number of women work in relatively low-risk industries, often with lower pay to partially compensate for the safer, more comfortable indoor office environments in occupations like office and administrative support (73.3% female), education, training, and library occupations (73.6% female), and healthcare (75% female). The higher concentrations of men in riskier occupations with greater occurrences of workplace injuries and fatalities suggest that more men than women are willing to expose themselves to work-related injury or death in exchange for higher wages. In contrast, women more than men prefer lower risk occupations with greater workplace safety, and are frequently willing to accept lower wages for the reduced probability of work-related injury or death.

In a recent debate, feminist Camille Paglia made a similar point:

Indeed, men are absolutely indispensable right now, invisible as it is to most feminists, who seem blind to the infrastructure that makes their own work lives possible. It is overwhelmingly men who do the dirty, dangerous work of building roads, pouring concrete, laying bricks, tarring roofs, hanging electric wires, excavating natural gas and sewage lines, cutting and clearing trees, and bulldozing the landscape for housing developments.  It is men who heft and weld the giant steel beams that frame our office buildings, and it is men who do the hair-raising work of insetting and sealing the finely tempered plate-glass windows of skyscrapers 50 stories tall.  Every day along the Delaware River in Philadelphia, one can watch the passage of vast oil tankers and towering cargo ships arriving from all over the world.  These stately colossi are loaded, steered, and off-loaded by men. The modern economy, with its vast production and distribution network, is a male epic, in which women have found a productive role–but women were not its author.