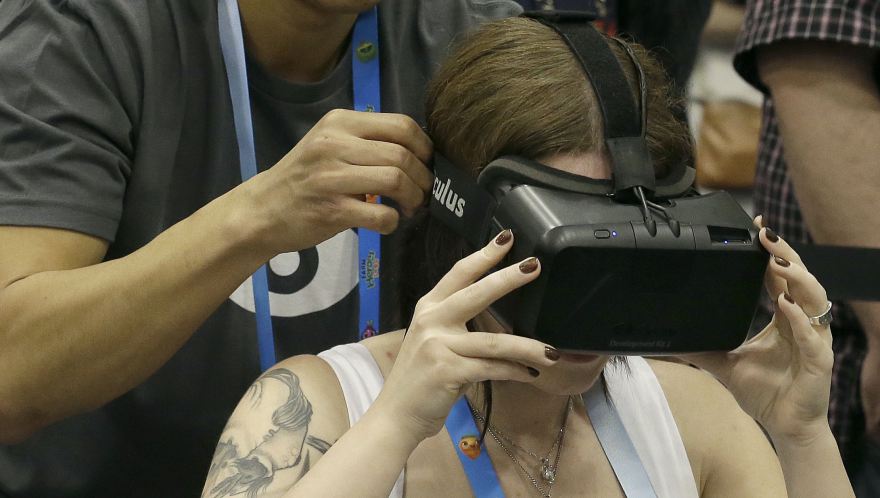 It’s always interesting to check the correspondence between the headline of an article and it’s URL. In this case, the headline reads: “Is the Oculus Rift sexist?” and the URL includes: “is-the-oculus-rift-designed-to-be-sexist/.” That nuance, that it is designed to be sexist, is going to be important as we delve into this story and ask ourselves this simple question: where do we reach the point where silliness outweighs legitimacy in the discrimination olympics?

So here’s the first fact: virtual reality (like the Occulus Rift) tends to make some people hurl. In fact, a major design point for the upcoming Occulus Rift has been to figure out how to alleviate headaches and nausea that can arise with use. And here’s the second: women tend to react much more to VR then men. But does it really make sense to fling around the term “sexist”? Danah Boyd, who wrote the piece for Quartz, clearly thinks so:

That’s when a friend of mine stumbled over a footnote in an esoteric army report about simulator sickness in virtual environments. Sure enough, military researchers had noticed that women seemed to get sick at higher rates in simulators than men. While they seemed to be able to eventually adjust to the simulator, they would then get sick again when switching back into reality. Being an activist and a troublemaker, I walked straight into the office of the head CAVE1 researcher and declared the CAVE sexist.

So, to be clear, we’re now declaring inanimate objects to be sexist.

But wait, is this just short-hand for calling the designers sexist? If someone makes a technology that is designed to make women spew chunks, but not men, that would indeed register as “sexist” in my book. But what’s actually going on?

Based on some interesting research, Boyd concludes that men and women process two different cues for depth perception differently. Men rely on motion-parallax, which basically means that closer things move more than things that are far away. Look at the way the clouds in this video (the most distant) move the slowest vs. the tubes (the closest) which move the fastest. That’s parallax.

Women, by contrast, tend to rely more on “shape-from-shading,” which Boyd describes as “a bit trickier.” She goes on to describe it:

If you stare at a point on an object in front of you and then move your head around, you’ll notice that the shading of that point changes ever so slightly depending on the lighting around you. The funny thing is that your eyes actually flicker constantly, recalculating the tiny differences in shading, and your brain uses that information to judge how far away the object is.

It’s not just trickier to describe, however. It’s also much trickier to implement. This is obvious to anyone who knows even a little bit about computer graphics (lighting is hard!) and Boyd agrees:

It’s super easy—if you determine the focal point and do your linear matrix transformations accurately, which for a computer is a piece of cake—to render motion parallax properly. Shape-from-shading is a different beast. Although techniques for shading 3D models have greatly improved over the last two decades—a computer can now render an object as if it were lit by a complex collection of light sources of all shapes and colors—what they they can’t do is simulate how that tiny, constant flickering of your eyes affects the shading you perceive. As a result, 3D graphics does a terrible job of truly emulating shape-from-shading.

So that’s my problem with calling VR “sexist”. The problem isn’t, or at least isn’t primarily, that you’ve got a bunch of dudes who don’t care what women need and/or enjoy excluding women. The problem is that the kind of technology that men react to is computationally easier than the kind that women react to. I’m all for recognizing that fact and working to mitigate it. Now that Facebook owns Occulus I think there’s no doubt that they are going to work hard to get to the bottom of that because you don’t want to alienate half your market. (When Occulus was a hardcore gaming device there may have been a perception that this wasn’t as important. Not anymore.)

I don’t mean to chalk this up to Boyd’s hyperventilating victim-complex. I know that editors choose headlines, and her concluding paragraphs are quite reasonable. But calling the technology itself sexist? Alleging, as the URL does, that it was designed that way? Come on, people. It’s getting silly.

3 thoughts on “VR is Sexist”