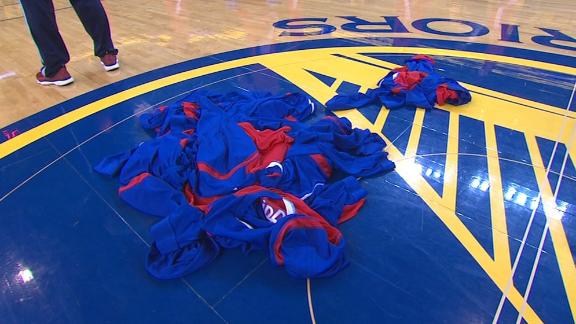 I wrote a post about the Brendan Eich situation and was going to post it this morning but a recent controversy has prompted me to address something else first.

Last week the owner of the Los Angeles Clippers was (allegedly) recorded making racist comments to his girlfriend, telling her he prefers she not associate herself or the team with black people in public. The recording, made by his girlfriend (who, by the way, is apparently black and latina), was released to the public (likely by her) and has set off a storm of criticism and outrage. The Clippers team itself engaged in a protest by hiding the Clippers logo on their warmup jerseys and then dumping them midcourt (see photo) before their first round playoff game on Sunday.

This is not the first time Donald Sterling has been known to utter an unpopular sentiment. In the past he has allegedly made comments far worse than what he was caught saying to his girlfriend, comments which I will not duplicate here. Simply put, he’s not a very nice person, and not many in the Clippers organization have nice things to say about him. Now, however, his behavior may cost him his team. The NBA is under pressure to force Sterling to sell the Clippers as his very presence will now surely drive advertisers away and will fuel the refusal of popular figures in and out of the league to support the team. Already current and former players have publicly voiced their displeasure with Sterling. This isn’t something that will just go away.

I read an article over the weekend written in response to this controversy that criticizes those who came to Brendan Eich’s defense when he was basically forced to resign as CEO from Mozilla when his support of Prop 8 several years ago was made public. The article states that anyone defending Eich’s support of Prop 8 but unwilling to defend Sterling’s racism is a hypocrite.

I take exception to this for a couple reasons:

If I worked for someone who I knew disliked people of my race, I would feel very uncomfortable working for him. At the same time, demanding he resign and shuffling him off for someone else to deal with feels wrong. I want to believe people can change. Ostracizing and punishing them for their personal feelings will only entrench their negative perceptions. Doesn’t it seem like the better approach to show them love and kindness despite their hurtful words? There is a time for protest, for boycott, but we must also recognize that we live in a time of equality and progress and if we want continue along that path the goal should be to uplift those caught behind, not push them further away.

I will have more to say about this within the next few days.