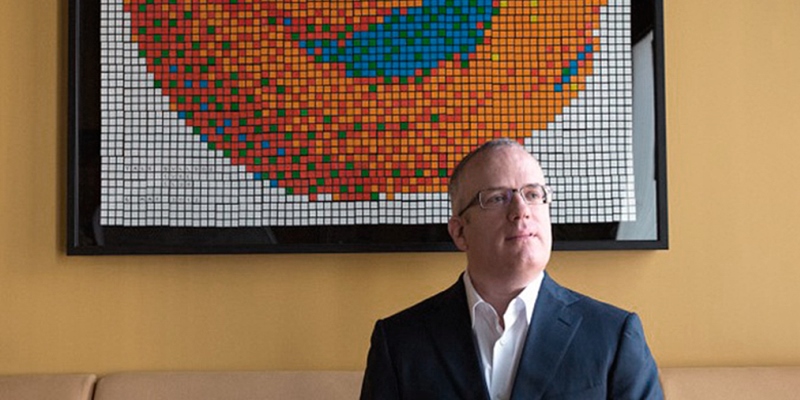 Today Brendan Eich, the CEO of the Mozilla Corporation (the guys who make Firefox) resigned. He had been CEO for less than two weeks. Here’s a rough timeline.

March 24, 2014 – Mozilla announced the appointment of Brendan Eich as the new CEO.

The Mozilla Board of Directors has announced that co-founder and current Chief Technology Officer Brendan Eich will be appointed to the role of CEO of Mozilla, effective immediately.

March 26, 2014 – News stories begin to break about the angry reaction by Mozilla employees and others in the tech world to Brendan Eich’s promotion. The Silicon Valley Business Journal had one search early example:

April 1, 2014 – The angry attacks on Mozilla escalate with OKCupid putting up a full banner ad denying access to anyone attempting to use their site with Firefox and explaining their opposition to Eich, as covered by International Business Times. 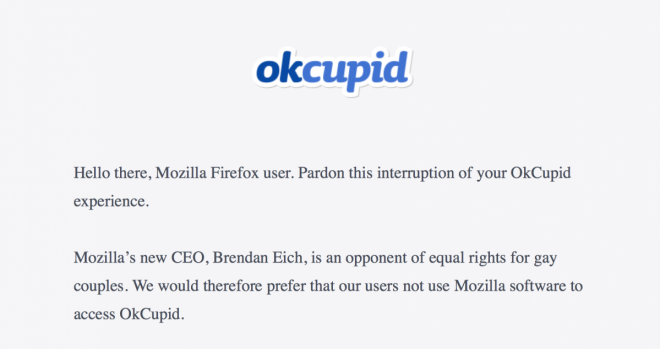 April 3, 2014 – News about the angry reaction concerns social conservatives. An anonymous article at First Things compares the reaction to “ritual sacrifice.” The excellent article also gave detailed back story on Eich’s history on the issue of gay marriage.

Why, then, the ruckus? Amazingly enough, it is entirely due to the fact that Eich made a $1,000 donation to the campaign urging a ‘yes’ vote on California’s Proposition 8. When this fact first came to light in 2012, after the Internal Revenue Service leaked a copy of the National Organization for Marriage’s 2008 tax return to a gay-advocacy group, Eich, who was then CTO of Mozilla, published a post on his personal blog stating that his donation was not motivated by any sort of animosity towards gays or lesbians, and challenging those who did not believe this to cite any “incident where I displayed hatred, or ever treated someone less than respectfully because of group affinity or individual identity.”

Upon being named CEO last Wednesday, Eich immediately put up another post which among other things pledged in direct terms first that he would ensure Mozilla continued offering health benefits to the same-sex partners of its employees; second that he would allocate additional resources to a project that aims to bring more LGBTQ individuals into the technology world and Mozilla in particular; and third that he would maintain and strengthen Mozilla’s policies against discrimination on the basis of sexual orientation and gender identity. It’s worth emphasizing that Eich made this statement prior to the storm of outrage which has since erupted, and that with these policies and others Mozilla easily ranks among the most gay-friendly work environments in the United States.

The First Things article also quoted from a very widely-read blog post demanding that Eich (1) stop claiming his support of Prop 8 was a private matter (2) recant his support of Prop 8 (3) swear loyalty to the cause of gay rights in general and gay marriage in particular, and (4) pay reparations to the Human Rights Campaign (or similar). The First Things article noted that:

The remedies demanded (public recantation, propitiatory sacrifice) are of the sort necessitated by ritual defilement, rather than the giving of offense.

April 4, 2014 – Brendan Eich announced his resignation. Here’s one story from the New York Daily news, but it’s been widely covered.

This tale serves to highlight two issues I’ve repeatedly raised on this blog. The first is the extent to which ostensibly secular movements and organization frequently assume distinctly religious behavior. One prominent example of this is global warming, of course, and many folks have pointed out that ardent supporters of policies designed to reduce human greenhouse emissions frequently embrace distinctly religious themes and rhetoric. The witch hunt against Brendan Eich is another example. As the anonymous First Things writer put it:

The key realization is that the howling mob which Thomas has ginned up is only partially an instrument of chastisement. It is also intended to educate. Thomas is in this to save souls.

Lots of people react with scorn to the idea that secular institution can be called “religious”. Obviously on one level, they cannot. But the deeper reality is that the human behaviors most closely associated with religion are not in fact derived from any of the supernatural beliefs religions hold. Concepts like ritual, purity, obedience, authority, and tradition don’t depend in any way on belief in gods. Religious institutions throughout history took on the traits and characteristics they did not because of religious belief, but because of human nature. Take away the belief in the supernatural, and all the elements of organized religion that critics decry remain just the same. In fact, it is precisely those who believe that belief in god causes the negative characteristics of organized religion that are most prone to repeating the mistakes of the past.

The second issue is the extent to which those who fail to toe the line concerning gay rights are in store for some very, very tough times to come. I understand that the first reaction from many people might be “serves them right.” There is truth to that. I have stated before that the worst mistake social conservatives ever made on this issue was to rely on animosity and fear in the early years of the gay-rights movement. It is only in the last few years that there have been highly visible examples of leading opponents of gay marriage overtly repudiating their prior practices and embracing a more loving and nuanced opposition to gay marriage. (See examples here and here.)

But, as the old saying goes, two wrongs don’t make a right. Andrew Sullivan (“a pioneering crusader for gay marriage” who married his boyfriend in 2007) said as much on April 3:

The whole episode disgusts me – as it should disgust anyone interested in a tolerant and diverse society. If this is the gay rights movement today – hounding our opponents with a fanaticism more like the religious right than anyone else – then count me out. If we are about intimidating the free speech of others, we are no better than the anti-gay bullies who came before us.

I hope tolerant voices like Sullivan’s win out (and it’s no surprise he went with the headline: The Hounding of a Heretic), but I doubt that they will. To the extent that gay marriage advocates have embraced the rhetoric of civil rights to make their case, there is no way to stop this train. Do opponents of interracial marriage have any kind of legitimate place within our society? No. Would the employees of Mozilla be willing to accept a Grand Wizard of the Ku Klux Klan as their CEO? No. Then why, based on the arguments that the proponents of gay marriage have proposed so far, should they be any more willing to put up with an anti-gay bigot like Eich? (And yes, merely donating $1,000 to Prop 8 is enough to qualify for bigot status.)

What makes me the most sad is that a lot of the folks who stand to suffer most in the future are those who have done nothing wrong in the past. I’m thinking of all the young Christian, Jewish, and Muslim kids growing up now, or yet to be born, who will be forced to choose between devotion to their religious faith and family traditions and acceptance within society. Are they guaranteed to follow the political or religious beliefs of their parents? No, of course not, but my fear is that in the not too distant future adherence to traditional religions will be taken (in the absence of explicit denials) as proof positive of anti-gay bigotry. Sound far-fetched? Maybe, but I think a couple of weeks ago the story of what happened to Brendan Eich would have sounded pretty far-fetched too.

Darren Aronofsky’s Noah rose above (or likely because of) the controversy surrounding it to have an impressive $44 million opening weekend. I was writing my review, but getting bogged down in some technical details regarding the Watchers. I’d much rather focus on some of the themes from an LDS perspective, so I thought I’d share this blog post from Rabbi Geoffrey Dennis (Adjunct Professor of Rabbinics, University of North Texas) that covers a lot of the interesting extra-biblical bits of Noah with further links. (I’ll likely build on these in my own review, but now I don’t feel obligated to explain it all.)

Drawing on a parable from the Zohar, Dennis writes,

Hopefully…people are finally coming to understand that the fundamentalist critics of this film are all masters of wheat as alluded to by the Zohar. They think that in cleaving only to the bare bones of the biblical narrative, they are masters of all aspects of the story, but in fact they are, to a great extent, suffering from a kind textual indigestion, or perhaps a spiritual ciliac disorder, in which they fail to absorb the full nutritional value of the biblical narrative because of their restrictive way of reading.  The Noah story as received, a mere one hundred verses, with little dialogue, minimal motivation, no character development or insight, no struggle, is a mere skeleton which the readers must flesh out with themselves, projecting their experiences, emotions, and conflicts, and imagination onto the scaffold of plot to fully realize its many on complex meanings and implications. The movie Noah steps into those many gaps and fills them with clever, and sometimes crazed, midrashic storytelling.