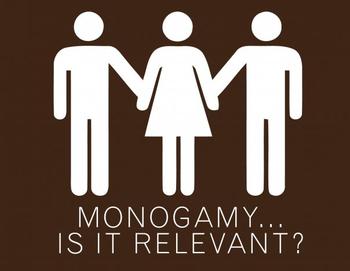 I realize that paying too much attention to what someone writing for The New Republic has to say about sexual morality is beyond silly, so I will try to keep this brief. The most interesting thing about Helen Croydon’s piece It’s Time to Ditch Monogamy is that it never really bothers to mount a serious argument. Not even a little bit. It approaches sexual morality with all the gravitas of discussing the latest fashion trends. In fact, less. I’ve seen more care and attention paid to articles on normcore than I have to this articles take on why monogamy is so five minutes ago. I cannot emphasize enough that I’m being earnest here. Normcore fashion is treated with more seriousness than monogamy. Literally.1

I’m also not going to indulge in any of the usual sky is falling rhetoric here. The sky has been falling and will continue to fall for the foreseeable future, but this article contributes nothing original or noteworthy to that ongoing process except as a prototypical example of “not with a bang, but with a whimper.” The debate over monogamy, among those who don’t see the point, is over precisely because they don’t even grasp that there’s anything intellectually serious to talk about. I mean, this is an article which includes “For these girls, Cameron Diaz is a good role-model.” as an ironically non-ironic statement.2

I’ll make one final observation, and this simply that this death-rattle of monogamy (at least among a very particular cultural segment of the United States) is just the inevitable conclusion of Disney’s version of romance carried to the extreme.3 First we make a fetish out of that euphoric, transient phase of romantic love and then we realize that euphoric, transient phases aren’t really relevant or important to the real world. Well, that’s true. They aren’t.

But what does that have to do with love and marriage, again? Don’t ask Croydon. She hasn’t the faintest clue.