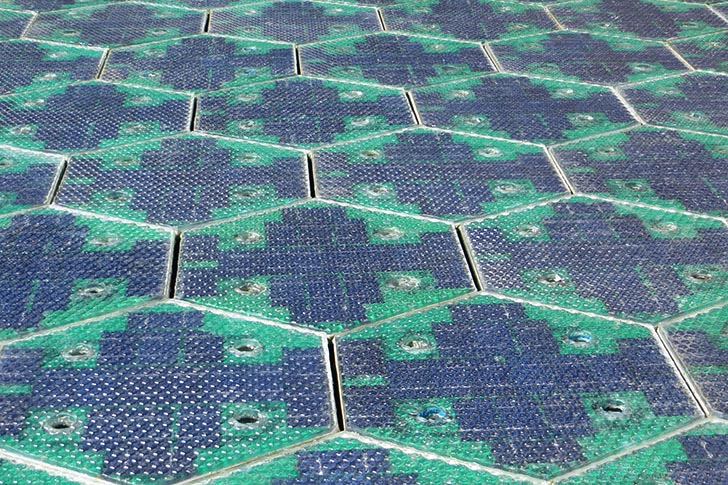 This is without doubt the most exciting kickstarter-style project I have ever in my life seen. The concept is simple, but the results are far-reaching and profound. Ready for the concept? Here it is: build all of our roads out of interlocking hexagonal solar panels. Hey look, there’s a video!

So there’s a little more to it than that, obviously. First: yes, the panels are strong enough for use as roadways. Second: they generate a lot of power. The estimate in the video is that they could generate 3x our entire national energy usage. Third: they are more than just solar panels. They also include heating elements to keep roadways clear during winter, LED panels for safety (and fun, when used on playgrounds or driveways, etc.), and come with conduits designed to allow buried power and telecommunications cable on one hand, and handle water run-off on the other.

One thing the video doesn’t mention, that it should, is the possibility of using these roadways to make self-driving cars infinitely easier and safer. The historical debate for self-driving cars has always been smart roads vs. smart cars. Smart roads are a lot easier in terms of technology, but require vast investment. But if we’re replacing all our roads anyway, then there’s no reason not to network them and make the network available to your smart car. Then you’d get an exact, real-time map of all the roads that would take some of the strain off of smart cars. (They would still need to be smart, but now you’ve got redundancy and have made their job easier.)

Obviously there are concerns. The issue of cost is not fully addressed. Neither is the issue of maintenance. There are a lot caveats and exceptions to consider, such as handling bridges and tunnels. Some parts are just not necessarily going to work that well. Replacing pained lane-markers with LEDs sounds awesome… but will they be readily visible in the middle of the day? And generating 3x the required power supply is great… except that it’s all generated during the day. The same issue that has always plagued solar power still applies: storage. Then there are the political considerations. Are global power suppliers (everything from nuclear to fossil fuels to other alternatives) going to just twiddle their thumbs while their market literally disappears? And generating enough power for all our cars to run off of the electricity from the roadways is great, but we’d actually need to all transition to electric cars first, which means phasing out hundreds of millions of cars currently in existence.

AND YET! And yet this idea, over the long run, feels like it has the potential to really change our world in a fundamental way for the better. It’s the kind of technological advance that I can see people taking for granted in the future, never realizing how much immeasurably better everyone’s lives have become by something that would be taken for granted not long after being implemented precisely because of how much everyone would depend on it every day. For me, it seems like it would be up there with, I don’t know, running water or electricity, or the interstate highway system. The kinds of things we don’t really appreciate, even though they define our modern world.

Maybe the current iteration of the tech doesn’t address all these problems, but I can’t help but feel that we’re close.1 And that this would be the kind of massive public project that I would love, love to support even as a conservative. Go support the IndieGoGo campaign now!

EDIT: The campaign has 8 days left. They  have raised over $400,000, but their goal is $1,000,000. The money will be used for moving from prototype to production, primarily by hiring additional engineers. I think it’s a worthy cause, but I’d like to know more about the short-term business model. Seems like selling to early-adopters who want to use the material to pave their driveways would be awesome, then moving up to commercial installations as parking lots to improve / prove the technology works. Replacing our national roadway system seems like the final phase, not the next step.

5 thoughts on “The Future is Now: Solar Freakin’ Roadways!”