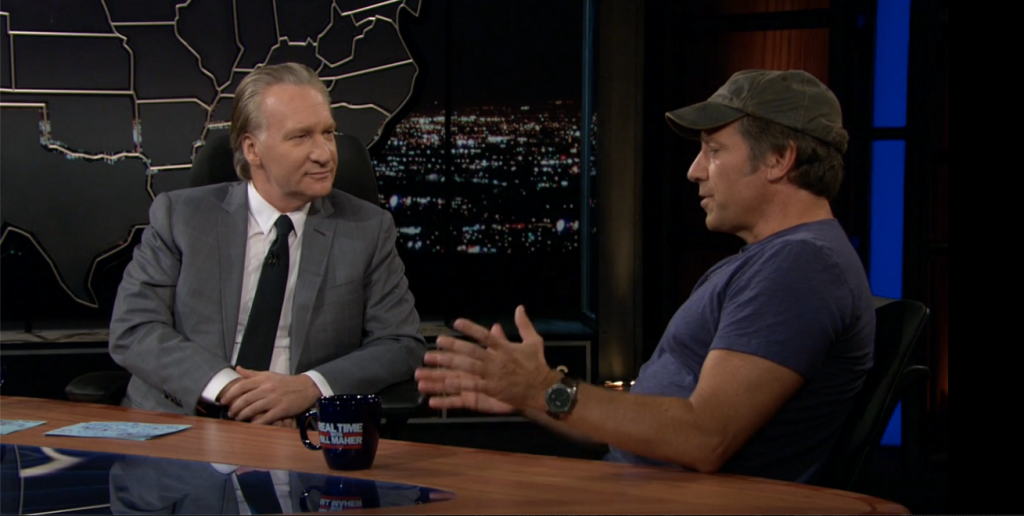 Mike Rowe is best known as the host of the Discovery Channel series Dirty Jobs, but I’ve noticed he’s been writing about politics more and more these days, and I like what he has to say. Here’s a story he shared, along with the photo above, on Facebook recently.1

[Bob Reidel: “Mike – Saw you hangin with Bill Maher. I had no idea you were a liberal. Really blew me away. Love everything you do but now that I know who you really are, I won’t be tuning in to watch anything your involved with.”]

Well, hi there, Bob. How’s it going? Since your comment is not the only one of its kind, I thought I’d take a moment to address it.

Bill Maher is opinionated, polarizing and controversial. I get it. So is Bill O’Reilly, which is probably why I heard the same comments after I did his show. (“How could you Mike? How could you?”)

Truth is, every time I go on Fox, my liberal friends squeal. And every time I show up on MSNBC, my conservative pals whine. Not because they disagree with my position – everyone agrees that closing the skills gap is something that needs to happen. No, these days, people get bent simply if I appear on shows they don’t like, or sit too close to people they don’t care for.

What’s up with that? Is our country so divided that my mere proximity to the “other side” prompts otherwise sensible adults to scoop up their marbles and go home?

Back in 2008, I wrote an open letter to President Obama, offering to help him promote those 3 million “shovel-ready” jobs he promised to create during his campaign. (I suspected they might be a tough sell, given our country’s current relationship with the shovel.) Within hours, hundreds of conservatives accused me of “engaging with a socialist,” and threatened to stop watching Dirty Jobs with Mike Rowe if I didn’t come to my senses.

When I made the same offer to Mitt Romney (who actually responded), thousands of liberals chastised me for “engaging with a greedy capitalist,” and threatened to stop watching Dirty Jobs if I didn’t take it back.

You may ask, “But what did these people think about the issue at hand?” Who knows? They were too busy being outraged by my proximity to the devil. (Poor Ed Shultz at MSNBC nearly burst into tears. “You were on the wrong stage, Mike! The wrong stage!! With the wrong candidate!!!”)

Here’s the thing, Bob – Profoundly Disconnected (http://profoundlydisconnected.com/) is not a PR campaign for Mike Rowe. It’s a PR campaign for skilled labor and alternative education. PR campaigns need … that’s right, PR, and if I limit my appearances to those shows that I personally watch, hosted only by those personalities with whom I personally agree, I might as well start a church and preach to the choir.

Point is, I didn’t go on Real Time to endorse BM, and I didn’t go on The Factor to endorse BO. I went on because millions of people watch those shows. I approached our liberal president for the same reason. Likewise, his conservative opponent. And I showed up on Sesame Street with the same agenda that I took to Congress.

Closing the skills gap is bigger than you or me or any particular venue, and Real Time gave me an opportunity to reach 5 million people. I’m grateful for that, and I’ll do it again if they want me back.

As for Bill Maher off-camera, you’ll be pleased to know that the guy was a perfect gentleman. His staff is excellent, and his after-party included an open bar with a spread I’ve never seen in such a setting. Bill took the time to hang out with his guests and their friends after the show, chatting about this and that for over an hour, and taking pictures with anyone who wanted one. Trust me, that’s rare.

Yes, he’s outrageous, inflammatory, and to many, a jagged little pill. But he’s also gracious, generous, engaging, and taller than he appears on TV.

Which, frankly, surprised me.

The world could use a few more guys and gals like Mike Rowe.