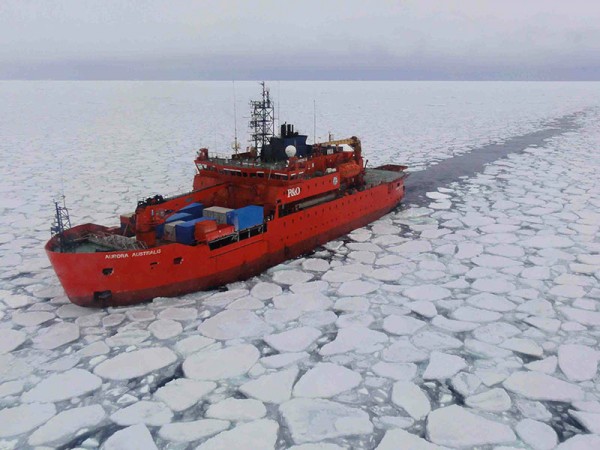 The whole global warming issue is pretty controversial, and one of the reasons for that is that–no matter what the consensus on the science might be–there’s actually a long and convoluted path from “human carbon emissions make the world warmer” to answering the question “what should we do about it?”

One of the big uncertainties, of course, is the cost-benefit analysis of policies designed to slow global warming. That’s what the Freakonomics guys did in one of their chapters from Super Freakonomics, and their conclusion was that–assuming climate change is real–there might not be any policy to stop it that is worth the cost. That claim, as you can imagine, landed them in some hot water.1

But there are other uncertainties as well. So the planet gets warmer. So ice at the poles melts and sea levels rise, right? Well, maybe not so fast:

It’s a nagging thorn in the side of climatologists: Even though the world is warming, the average area of the sea ice around Antarctica is increasing. Climate models haven’t explained this seeming contradiction to anyone’s satisfaction—and climate change deniers tout that failure early and often. But a new paper suggests a possible explanation: Variability in the heights of ocean waves pounding into the sea ice may help control its advance and retreat.

The reality is that the Earth’s atmosphere and land and ecosystems and the sun’s radiation all work together to form a very, very, very complex system full of all kinds of negative and positive feedback loops that we know nothing about. This is just one example. Ice has been growing since at least 1979 despite projections, but no one had a clue. Now they have one but it is, of course, still just a clue. As science goes: this is great. When the data doesn’t line up with your predictions, it means you’re not understanding something and you have a chance for a new discovery.

But as a basis for expensive, global policy-making goes, this is not so great. The one thing all policies to thwart global warming have in common is making energy more expensive which will have the effect of lowering growth which will have the effect of keeping more people in the developed world in poverty for longer. We can be much more certain about that then we can about the corresponding threat from global warming. After all, we can’t even predict if the sea levels will rise at all, let alone by how much, so how can we begin to make a careful evaluation of the cost/benefit of policies to mitigate this unknown danger?

The consensus on global warming is often trotted out as a cudgel with which to beat skeptics, but this isn’t really effective once you step back and realize that climate change, itself, is only one part of a much, much more complex puzzle.

2 thoughts on “Shrinking Waves May Save Sea Ice”