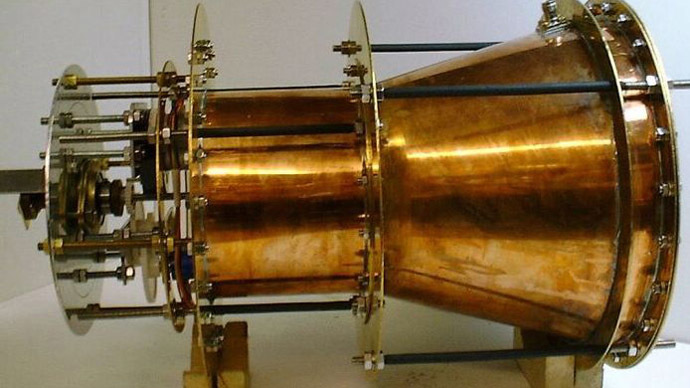 So there are two really cool sci-fi propulsion technologies that folks at NASA  are working on these days. The first, which I’ve written about before, is the  Alcubierre drive. That’s a highly theoretical concept for traveling faster than light that made headlines in 2012 and again this year.1 Now, I’d say one sci-fi propulsion announcement per year is pretty good, but back in July there was a flurry of articles about a completely separate, exotic propulsion possibility.

Nasa is a major player in space science, so when a team from the agency this week presents evidence that “impossible” microwave thrusters seem to work, something strange is definitely going on. Either the results are completely wrong, or Nasa has confirmed a major breakthrough in space propulsion.

Now, this propulsion technology, called the EmDrive or  RF resonant cavity thruster, isn’t faster-than-light but it’s still really exciting. Here’s why: standard propulsion theory says that in order to make your spaceship go one way, you need to make something else go the other way. This is called conservation of momentum, and in practice it means that rocketships have to carry their fuel with them. This is a debilitating limitation on the range and speed of spacecraft because when you load up extra fuel to go faster, you also make the ship heavier. So the more fuel you add the less benefit you get from adding more fuel.

There are two hypothetical ways to get around this limitation. The first is a Bussard ramjet. It is basically gigantic stellaar bulldozer (thousands of kilometers wide) that collects sparse hydrogen atoms from space as the ship moves, then compresses them and shoots them out the back. In other words: it gathers fuel as it goes. It’s a cool idea, but it only works for very large ships traveling very fast. And it doesn’t work at all yet, given the technology we have today.

The EmDrive works, well, no one actually knows why it works although there are theories. The point is, you put electric power in (but no fuel) and you get propulsion out. And it works. People have been claiming it works forever and NASA got tired of saying it probably didn’t so they tested it. And it did. Not a lot, mind you, but working at all is more than anyone expected. So, what can we expect?

If the technology can be figured out and refined, it would make satellites a lot cheaper for starters: they wouldn’t need to carry fuel (extra weight) and would be able to move around almost indefinitely (increasing their useful lifespan). But why stop there? “Say hello to deep-space missions and distant world exploration at a fraction of the cost and at 100 times the speed,” says RT.com. Without any need for fuel, travel around the solar system would be much, much faster (lighter ships accelerate and slow more easily) and even trips to other, nearby worlds might become feasible in relatively short (multi-year) periods.

Now that is exciting!