I don’t agree with everything from this article at the Guardian, but I like the main point. Which is as follows:

The chart above is not a valid definition of feminism. As the article says:

The test is fun, to the point, inclusive: it gets people on board and gets more men calling themselves feminists. Allies – huzzah! But it’s also kind of lying. You need to believe some other important things in order to be a feminist…

Then we get a more complicated chart: 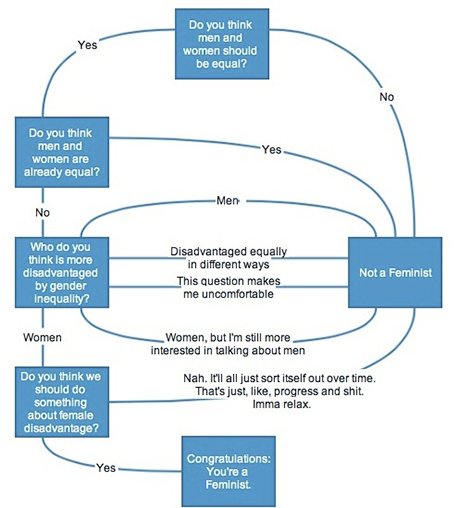 I could nitpick the chart (all the reasons for being “Not a feminist” are pretty lame), but the article is a bit more nuanced:

There are plenty of ways to be awesome without working towards equal rights for women. For example, if you answered “Who do you think is more disadvantaged by gender inequality?” with “Women, but I’m still more interested in talking about men,” that’s fine. Maybe, like Tom Matlack, who founded the Good Men Project, you are a pro-feminist: that is, someone who supports the goals and objectives of the movement for equal women’s rights, but who is actively working on male issues. Gender initiatives like the Good Men Project move us towards a more equal society, which benefits women in many ways, just like feminist initiatives benefit men in many ways.

So the point ends up being that you have to be pro-feminist in order to be a decent human being, but you don’t actually have to be feminist. I like this because it’s honest about the fact that feminism means more than “I support equal rights for women.” In doing so, it defuses the main use of the term feminism these days, which is to browbeat social conservatives into silence. Here’s how that works:

See how that works? It’s nonsensical, but it is effective. But if, like the author of this piece, you’re honest enough to admit that there’s more going on with feminism then just equal rights for women, the tactic mostly falls apart. Which, in the long run, is good for everyone. What ever feminism means (opinions vary widely), making it something other than a subset of left-wing ideology is probably good for everyone.