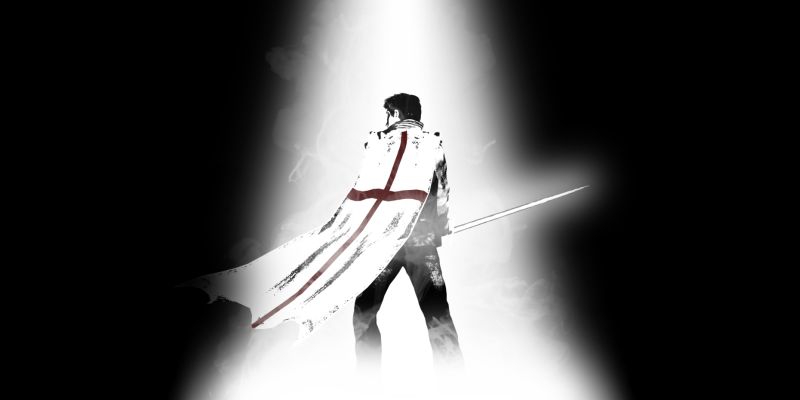 That’s Michael Carpenter.1 Michael Carpenter is my favorite character in the Dresden Files, which is my favorite series. He’s a Knight of the Cross, which means he’s one of three mortals chosen to wield one of the Swords of the Cross, each of which contains a nail from the Crucifixion. They oppose the Denarians–basically fallen angels–although their main job isn’t to conquer the Denarians, it’s to try and rescue humans that the Denarians trick and enslave to their will. Along the way, however, Michael can and does do battle with vampires, dragons, and any other force of darkness that threatens to harm the innocent.

All of that is pretty cool, but none of it gets to the heart of why I like Michael so much. I like him because he’s a devout Catholic. Because he’s a faithful husband. Because he’s a loving father. Because he doesn’t lie or curse, and because he is, in the end, a humble man who just wants to do the right thing because he sincerely trusts and loves his God and his neighbor. He is, in short, a goody-goody.

This type of hero is very rare. Outside of children’s literature (Narnia, or The Dark is Rising, or Harry Potter) and comic books (Superman or Captain America) this kind of hero is basically non-existent. In fact, the piece to which this post is a followup included a link to an article complaining that Captain America “is only interesting if he’s a prick.” Nice guys finish last in more ways than one, it would seem.

Don’t get me wrong: I’m not saying every hero should be a Boy Scout. Where would the world be without scoundrels and rogues? I’m not arguing against Han Solo and Malcom Reynolds!

Walker also wrote a great followup to my initial post called “Darker, Dearie. Much Darker”: Why I Don’t Like “Nice” Heroes in which he said:

Walker’s absolutely right: the redemption narrative is a powerful one. So this post isn’t meant to contradict Walker’s piece. It’s just an alternative or a supplement. It explains why, for all the allure of the anti-hero in need of redemption or the scoundrel with no interest in being saved, my favorite heroes are the white knights.

Let me start with a technical note, however. In Western culture, plot is conflict-driven. This is such a deep cultural assumption that it’s one of those assumptions you don’t even know is an assumption until someone comes along and shows you that there are alternative ways of doing things. Does a fish know what “wet” means? Nope, not unless it has survived a stay on dry land and learned by contrast to understand the nature of its own existence. So it is with conflict-centric plot. If you don’t see an alternative, you don’t even know it’s what you’re swimming in.

So, as a comparison, I offer up kishōtenketsu which “describes the structure and development of classic Chinese, Korean and Japanese narratives.” There’s 4-panel comic at left as an example: it has plot, but no conflict. 2

The connection between conflict-driven plot and white knights is simple: you don’t necessarily need for your hero to make mistakes, but it certainly makes creating and sustaining conflict easier when they do. This means that Western literature is structurally biased against simplistic good guys. They aren’t impossible to work with, but they are–all else equal–a bit harder to handle.

I don’t think that this fully explains the dearth of goody-goody heroes, however. The same argument that suggests we need morally deficient heroes (to make questionable decisions and fuel conflict) suggests that we need intellectually deficient heroes (to make decisions that are questionable in a different sense of the word), and yet we manage to have intelligent heroes more often than white knights.

Rather than speculate on why our society seems to discredit good guys, however, I just want to say a bit about why I like them.

First of all: I can identify with them. Stick with me for a bit, however, because this might not be going in the direction that you think it is.

The important thing is that I identify with the way other people dislike the Boy Scout, but I don’t in any way identify with being morally superior, because I’m acutely aware that I’m not. Sure, I’ve never done drugs, but folks like John Scalzi rarely drink not as a matter of moral principle but because they don’t like to experience a loss of control. That’s not a moral decision one way or the other; it’s a combination of a personal preference and self-preservation. And the reality is that a lot of the vices that I avoided, I avoided for the same reason: personal preference and/or risk avoidance. Sometimes I chose not to do things not because I had such great principles, but because I was scared to do them. That’s not very heroic.

I also realize that I’ve been very lucky. I come from a good, stable home with parents who taught me well and modeled good behavior in their own lives. I didn’t suffer any of the tragedies and hardships that so can damage innocent people and lead them to make bad decisions of their own. I know from research and second-hand experience that these kinds of tragedies are horrifically common. I was just lucky.5 The safety, training, and support I received came to me through no merit or choice of my own. There’s no credit in that, either.

So when I see a good guy on screen or in a book who colors mostly inside the lines, I empathize with them. I know that they will appear boring, self-righteous, and shallow to a lot of people because that’s how I come across to a lot of people. I also assume that they have complex reasons for their behavior that are not always good reasons. And so I tend to identify with them both as someone the world often thinks is weird and as someone who has their own struggles and failings to deal with, even if they are sometimes more internal.

That’s another technical point, by the way. Characters who struggle a lot internally don’t often convey well on-screen. So the bias against goody-goodies is strongest in television and movies, and a little bit weaker in books that have a chance to get inside the character’s head.

The thing is, everyone who tries to do the right thing struggles. In the Dresden Files the main character is Harry Dresden. He’s an orphan who was abused as a kid and who–partially based on personality and partially based on his experiences–has serious authority issues, unreasonable levels of petty stubbornness, and a predilection for anger and violence. He struggles all the time with his demons, and sometime he loses and the result is kicking off a supernatural war.6 If you  just glance at Michael Carpenter, he always seems to make the right call. But if you look again you can see that it’s not easy for him. He’s doesn’t mindlessly follow the rules without any quibbles. He has to make his own decision about how to interpret them, how far to bend them, and when to follow them even though it puts him or even his family at risk. He deals with ambiguity and guilt and shame and sacrifice, too.7

So part of what I’m getting at is simply this: white knights need redemption, too.

Back when I first started Difficult Run and ran it solo for a while in 2012, I wrote on the “About” page that “I am the prodigal son’s older brother.” He’s the one I identify with the most in that story.  Superficially he’s the good guy because he he didn’t run off and blow his inheritance on booze and hookers and end up starving and eating with the pigs, but if you look deeper he’s the same as his younger brother. The prodigal son’s primary failing was a lack of love and loyalty for his family. He wanted the money (his inheritance) more than he wanted his home, and everything else follows from that. Sure, the elder brother stayed home, but when he sees the party everyone is throwing for the young son, he starts whining and complaining. Those complaints show is that he is also pretty contemptuous of his home and his father’s love.

That’s why the father’s response to his older son is so incredibly tragic: “And he said unto him, Son, thou art ever with me, and all that I have is thine.”8

In other words, he’s saying that if you really cared about me, then you would think that the last several years you spent living with me in comfort and peace while your brother was hitting rock bottom were the reward. Did the elder brother stay home because he was loyal, or because he was afraid? Did he love his dad, or did he think he was doing him a favor? Was he interested in doing the right thing for its own sake, or because he thought he’ be rewarded? In the end, the fact that he’s jealous of his younger brother shows that he is essentially the same as his younger brother. Just a little more risk-averse. Like me.