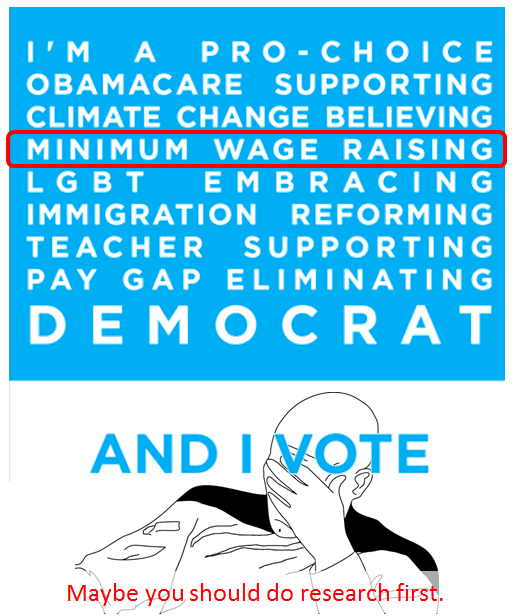 I saw the image above on a friend’s Facebook profile on Tuesday. Well, not exactly. You can probably tell what parts I added to it. Don’t get me wrong, minimum wage isn’t the only thing I take issue with on that list, but it’s just the one that is just objectively dumb. We’ve written about exactly why the minimum wage is foolish here at DR many times already, but life handed me a fresh example, so here goes. The WSJ reports that (1) McDonald’s profits were down 30% in Q3 2014 and that (2):

By the third quarter of next year, McDonald’s plans to introduce new technology in some markets “to make it easier for customers to order and pay for food digitally and to give people the ability to customize their orders,” reports the Journal.

In other words: the Golden Arches are losing money and plan to economize by replacing workers with machines. Is it any coincidence that this announcement comes just after CEO Don Thompson signed endorsed President Obama’s call to raise the minimum wage? No, it isn’t. It’s politics. Ignorant people call for hiking the minimum wage without realizing that they’re going to cannibalize jobs. Astute CEO gives up on trying to be reasonable and just goes with the flow, knowing full well that if/when the minimum wage rises, his company will be able to survive through automation.

There are much, much better policies to fight poverty. Why is no one rallying around making the efficient and effective Earned Income Tax Credit even more powerful? Politics. Calling for minimum wage hikes is like having the village pressure the one doctor into bleeding the patient to save his life. “But this won’t make the patient better,” the doctor cries. “What,” says the rabble rouser, “Are you saying you want the patient to die! Apply the leeches!” It’s a great way to make the doctor look heartless. It’s not a good way to help the patient get better.