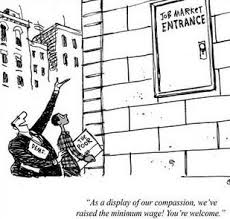 Nathaniel recently pointed to a new study that reported the drop in unemployment benefit duration in 2014 led to an increase in job creation.1 An NBER study2 toward the end of 2014 on minimum wage hikes complements this research.

The abstract reads as follows.

We estimate the minimum wage’s effects on low-skilled workers’ employment and income trajectories. Our approach exploits two dimensions of the data we analyze. First, we compare workers in states that were bound by recent increases in the federal minimum wage to workers in states that were not. Second, we use 12 months of baseline data to divide low-skilled workers into a “target” group, whose baseline wage rates were directly affected, and a “within-state control” group with slightly higher baseline wage rates. Over three subsequent years, we find that binding minimum wage increases had significant, negative effects on the employment and income growth of targeted workers. Lost income reflects contributions from employment declines, increased probabilities of working without pay (i.e., an “internship” effect), and lost wage growth associated with reductions in experience accumulation. Methodologically, we show that our approach identifies targeted workers more precisely than the demographic and industrial proxies used regularly in the literature. Additionally, because we identify targeted workers on a population-wide basis, our approach is relatively well suited for extrapolating to estimates of the minimum wage’s effects on aggregate employment. Over the late 2000s, the average effective minimum wage rose by 30 percent across the United States. We estimate that these minimum wage increases reduced the national employment-to-population ratio by 0.7 percentage point.

As shown above, the study found that minimum wage hikes “significantly reduced the employment of low-skill workers” as well as their “average monthly incomes.” Furthermore, low-skilled workers (especially those without a college degree) experienced “significant declines in economic mobility” over time. As entry-level jobs decreased, so did the chance for low-skill workers to gain the work experience and skills to move up the economic ladder. As economist Arthur Brooks put it, there are no dead-end jobs: each one brings more experience, more skills, and consequently, more economic mobility. We should stop promoting policies that make entry into the job market that much harder.