You’ve probably heard a lot about the growing gap between average worker pay and CEO pay. This seems like a legitimate concern, but I’ve had some questions about the data and the assumptions ever since I first started hearing the statistics. I would kind of expect, for example, that CEOs of larger companies would probably get paid more. So if you had two companies with 1,000 employees each and they merged and you ended up with one CEO of a company that had 2,000 employees, do you think he’d get a raise? So consolidation (which might be a bad thing for other reasons) might inflate the average worker to CEO salary ratio in ways that aren’t necessarily that bad.

In any case, the American Enterprise Institute1 has a related critique of those figures. It turns out that most of them are based on a very small sample size (the WSJ looked at only 300 CEOs, the AP looked at only 337, and the AFL-CIO looked at 350). Not only are these samples small, but they’re also heavily skewed towards the biggest companies. And so, as the AEI points out, “Although these samples of 300-350 CEOs are representative of large, publicly-traded, multinational US companies, they certainly aren’t very representative of the average US company or the average US CEO.” Turns out, there are more than a quarter million CEOs in the country. Comparing average worker salary to the 350 or so from the biggest companies is like comparing average worker salary to the top 0.1% of CEO salaries.

If you do compare average worker salary to average CEO salary (which can be done, the data is available), then the gap drops from 331:1 to 3.8:1 and the apparent growth over the last 13 years disappears. 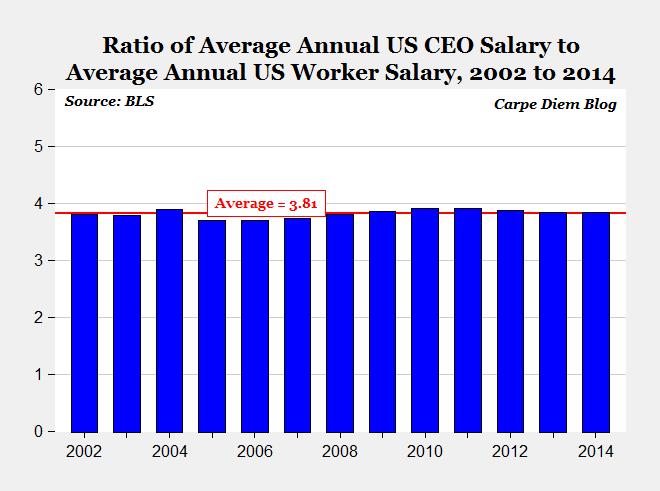 I think a realistic assessment of the statistics is important, but I’m not willing to go quite so far as the AEI: “We should applaud the richest 300-350 CEOs as a group of the most successful American business professionals.” I think there are real questions about whether CEO pay is really an accurate reflection of their contribution to the economy, and there are also serious questions about how compensation structure can create perverse incentives where high-paid executives take risky strategies that end up rewarding them when they win and penalizing the rest of us (via bailouts and economic downturns) when they lose. And do the top 0.1% of CEOs really need our applause? Aren’t their salaries enough?

3 thoughts on “The Real Gap Between Worker and CEO Pay”