That’s one of the reasons the minimum wage issue frustrates me so much, and it’s why we write about it so often at Difficult Run. Some conservatives oppose the minimum wage because they care about the poor. Another response–probably a more common one–is to make sure that you are not confused for those backwards, bigoted, Bible-thumping conservatives by establishing yourself as someone who is conservative economically but doesn’t share their weird religious hangups. For example: Bleeding Heart Libertarians or the Secular Right.

But, in this post, I just want to explain one more reason why conservatives can appear heartless to their liberal friends and families: hoaxes and hysteria.

Not long ago, you may have seen the story of the woman who received a letter from a neighbor that her yard was “relentlessly gay” because she has rainbow-colored lamps in it. This kind of thing validates all your fears about those bigoted conservatives and their intolerant ways, and it was shared widely. Conservatives like me, however, were a bit skeptical. Especially when the article was linked to a crowdfunding campaign to make her yard even more gay 2 Well, it turns out that conservatives were probably right to be skeptical:

Anti-hoax consumer activists raised suspicions as soon as the fundraiser began, because Baker’s own idiosyncratic capitalization and punctuation matched the style of the alleged letter from her neighbor. Quoth LaCapria: “…Although Baker had stated the previous day that police were “satisfied” with her claim, the detective to whom we spoke said that Baker was either unwilling or unable to produce the letter in question, and that she had maintained it was no longer in her possession. The detective also indicated that he had attempted to meet with Baker in person the previous day but was unable to do so.”

This isn’t an isolated incident. In another example, I saw all kinds of liberal friends on Facebook react with horror to the story of how a gay Utah pizzeria worker had been viciously assaulted for being gay. It turns out that this attack was also staged:

A man who reported someone beat him and carved a homophobic slur into his arm staged the attacks, authorities in rural Utah said Tuesday. Millard County Sheriff Robert Dekker said Rick Jones, 21, could face charges after officers investigating the series of reported attacks found inconsistencies in the evidence. The Delta man eventually acknowledged faking the harassment, Dekker said.

His lawyer says it was “a cry for help,” and that seems reasonable to me. My heart goes out to someone who, for whatever reason, thought that this might be something that would make their life better. I’m not mad at the people who shared the story either, because I know they were acting out of a desire to do good by showing solidarity for (as they thought) a victim of a hate crime. But I am saddened (thought not surprised) that the news that the attack was staged will not make the rounds as the news of the initial assault did. I wonder, what percent of people who saw the initial story will miss seeing this followup?

Here is just one more example. You may have heard of Sir Tim Hunt, the Nobel laureate biologist who was fired within days of apparently making sexist remarks such as:

Once again, this example of egregious sexism made the rounds on Facebook, even prompting a rather hilarious #distractinglysexy backlash on Twitter. 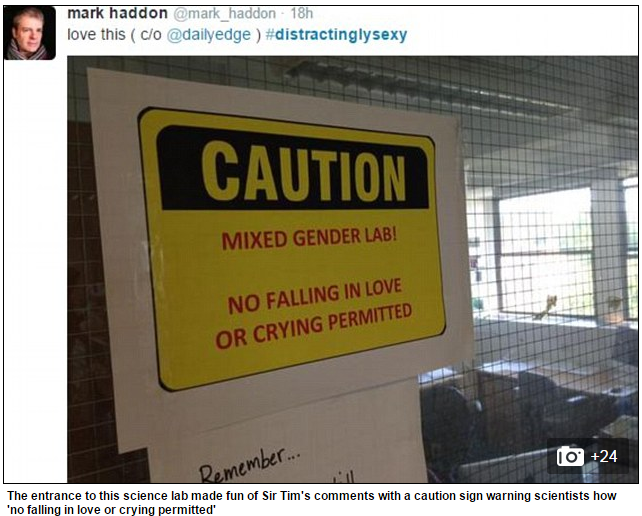 It really was hilarious, but my mirth was tinged with sadness. First, because I was pretty sure that a man smart enough to be a knight and a Nobel prize winner probably wasn’t dumb enough to say something that absurdly sexist even if it reflected his true beliefs, and secondly because it’s depressing to think that so many people live in a world where they think that kind of rampant misogyny is common and unsurprising.

Well, it turns out that the critical account of Hunt’s words came from a single source, and that source has a track record of lying and dissembling, primarily by either falsifying her CV or just claiming things that sound way more impressive than they actually are:

Elsewhere in the six-page CV is a section devoted to ‘Qualification and Training’. In it, St Louis trumpets the fact that she is ‘a member of the Royal Institution’.

Again, very prestigious. Or so it seems, until a spokesman for the Royal Institution told me: ‘Anyone can be a member. It’s simply a service you pay for which entitles you to free tickets to visit us and gives you a discount in our cafe.

‘It’s like having membership of your local cinema or gym.’

Why would someone include such a thing on their CV?

‘Actually, that’s a bit of a problem,’ the spokesman added. ‘We have heard of a few people using membership on their CV to imply that they have some sort of professional recognition or qualification. But it means nothing of the sort. It’s very, very odd to see this on a CV.’

This woman’s uncorroborated (and now, contradicted) testimony is all that it took to trash a successful scientist’s 50-year career.

As far as I understand it, the primary reason that social liberals don’t talk about these hoaxes very much is that they are concerned that admitting to the prevalence of hoaxes will erode their position and make people apathetic about racism and sexism. The problem is that refusing to talk about the hoaxes actually does the same thing, but the effect is even stronger. It gives conservatives the impression that social liberals are either intentionally using false events for political gain or, at a minimum, are reckless in their handling of the truth.

At the same time, however, the fears of liberals are not unfounded. There is a very real chance that conservatives tend to dismiss the real costs of inequality and prejudice because this parade of hoaxes (these three articles are all from just one week) creates a festering cynicism.

So what should we do? Well, I’d like to see more data-centric articles to tell the truth. I’m really tired of breathless, sensationalist reporting that rushes to judgment and completely fails to take any context into account. For example, there are numerous articles out these days about spate of fires in predominantly black churches. How bad is this problem? Is it a new trend? How many of the fires are definitely arson? None of the articles I have seen go into that, which seems bizarre given how incredibly important this story is.

Something else I’d love to see: a little more generosity in how we evaluate each other’s motives. Here’s a great example of how not to do it: Amanda Marcotte’s Talking Points Memo piece The Real Reason Why Conservatives Like Ross Douthat Oppose The Gay Marriage Ruling. The article Marcotte is referring to is Gay Conservatism and Straight Liberation in which Douthat argues that “the gay rights movement has won twice over. Its conservative wing won the right to normalcy for gay couples, while rapid cultural change has made the definition of normalcy less binding than the gay left once feared.”

Clearly Douthat is a conservative, and so I would hardly expect for Marcotte to agree with him. But her article is breathtaking in its vicious assumptions about his motives and not just his arguments. According to her, Douthat “declines to spell out exactly what parts of traditional marriage he would like to keep.” That’s absurd: the parts he wants to keep are: monogamy, permanence, and an orientation towards procreation. This is the same for all conservatives. But by pretending that Douthat is unclear, she gives herself license to put words in his mouth, noting that “the human past is one where women were treated as chattel to be passed from father to husband, legally and socially regarded merely as extensions of their husbands instead of people in their own right” (which is true) and alleging that Douthat is pining for precisely that ancient misogyny (which is absurd). She concludes that Douthat–and all conservatives–oppose gay marriage because “it redefines marriage as an institution of love instead of oppression.”

This is hysterical nonsense that exists on the same level as Dinesh D’Souza’s conspiracy theories about President Obama dedicating his entire life to becoming President of the United States so that he could intentionally destroy the country from within to honor his absent father’s anti-colonial ideology and thereby win his ghostly approval. Or something.

Please, America, just walk away from this stuff. There are monsters out there, that is true, but most of your neighbors are not monsters. Your conservative neighbors don’t hate gays and your liberal neighbors don’t hate America. When you see another article making the rounds on Facebook that says something else, either speak up against it3 or just let it go without a like or a comment or a share.

I’m not saying that both sides are equal. I have chosen a side. I am a conservative. I’m not hiding that. I’m not pretending that I think all views are equally correct. But it really is time to back away from the crazy brinkmanship and hysteria.