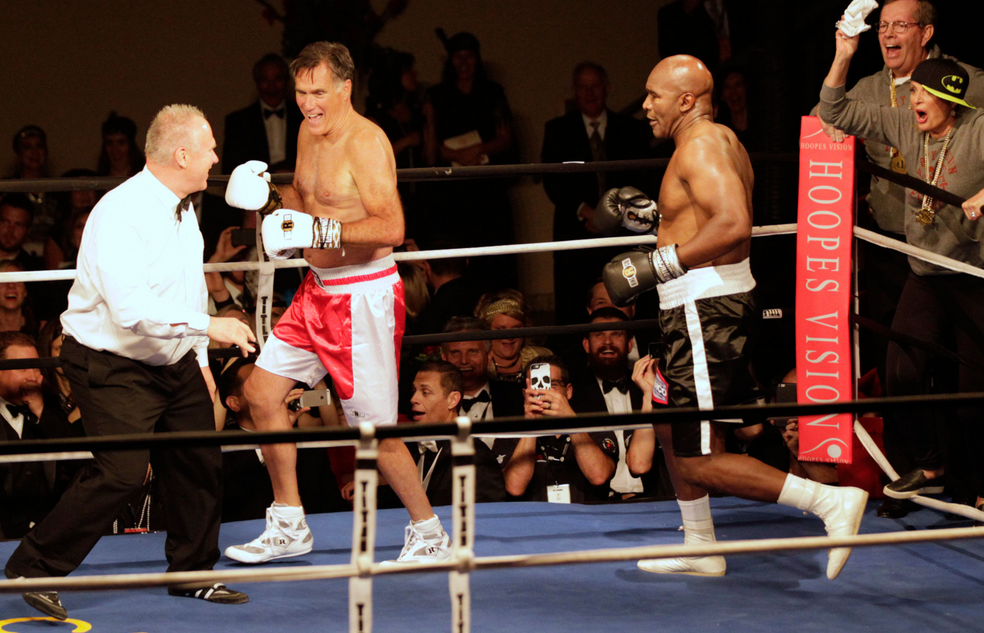 New York Magazine says Romney Is Horrified by Trump — and That’s Restarting ‘Mitt 2016’ Talk, and the story is getting echoed at places like Breitbart. CNN is in on the rumors as well:

But while Mitt Romney doesn’t back the Trump agenda, Robert Costa of The Washington Post reports that his check-in with close Romney advisers produced no evidence the former Massachusetts governor is heeding any of the calls for him to reconsider the race. Not yet, anyway.

“He’s very surprised that Jeb Bush hasn’t got a lot of traction,” said Costa. “He thought Jeb would be better at this point. He also thinks the race doesn’t really start until January and February.”

“In terms of ruling out a run, he’s not running. But he thinks the race begins in January and February, and he’s watching it very closely, and people just kept telling me the same thing — he’s keeping an eye on it.”

Look, I’m not a political expert or a pollster. I got pretty suckered during 2012 by the folks who thought the polls were systematically skewed and Romney had a better chance than he actually did. That experience left me pretty humble, and I’m out of the political prognostication business. I am not making any predictions or even guesses. Here, instead, are some thoughts.

I’ve liked Romney going back to 2008 when, in the presidential primaries, he wanted to talk about serious social security reform. It’s boring, but it’s important. That’s the kind of person I want to run the executive office: someone who has integrity, competence, and a willingness to focus on things that are boring but important. Candidates like Ron Paul or Bernie Sanders are fun, but are they actually good matches for the job description? Ideology has a very important role, but ideologues may do better work outside the Oval Office than from within it.

Romney is a lot more popular now than he was in 2008 or 2012. The question is: how much of that evaporates the moment he becomes a candidate again? As long as he’s on the outside he’s no threat to Democrats or competing Republicans. As soon as he’s a contender again, all his enemies come back to remind us why he’s terrible. I think at least some of the new popularity is permanent. Folks have seen another side of Romney1 and they won’t forget that. As NY Mag notes:

But how much? I have no idea.

Then there’s the tactical question: you don’t just decide at the last minute to run a serious national campaign. You need a whole apparatus for that. Romney can’t summon one up out of thin air. But then, does he have to? The Romney apparatus is somewhat dismantled and distributed among other campaigns, but not entirely. NY Mag again:

Romney’s vast donor network is a coveted asset, and Romney’s finance wizard, Spencer Zwick, who raised $1 billion for him in 2012, remains unaffiliated with any campaign (Zwick now chairs the super-pac America Rising). “Mitt actually attracted new donor groups,” says the Romney veteran. “They’re in the Mormon community, the Bain Capital community, and the private-equity community. Most of them are not going to jump in for anyone else until they get guidance. Romney delivers them.” This is why six GOP presidential contenders went west to prospect for millions at Romney’s three-day Utah summit in June. “With Romney, it’s just so bizarre,” the veteran said, marveling at Romney’s power to organize a cattle call. “Imagine Bob Dole. He’s out of office and he says, ‘I want all my donors to come to some hard-to-reach place.’ That’s just never going to happen.”

Anybody else talking about getting into the race now would be a very, very long shot at best. But Romney? He might be an exception to that rule.

My dream scenario is that Romney gets more or less drafted to come in and take out Trump. Right now everyone else is either failing to make any headway (like Jeb Bush) or starting to pander to Trump supporters in the hopes of picking them up after someone else takes Trump out2 (like Ted Cruze). Maybe it takes an outsider to come in an be the grown up. That’s a good role for Mitt. That’s a narrative he can sell. I hope he gets that chance.