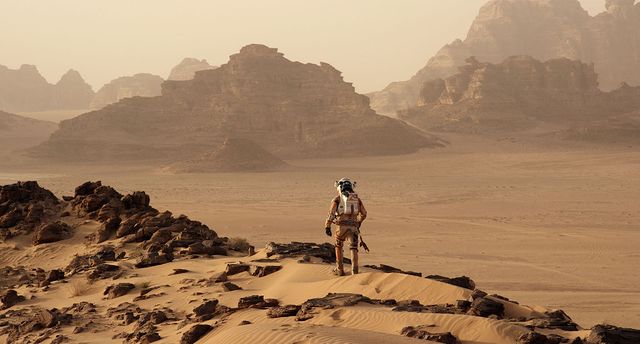 If you haven’t heard of The Martian

yet, you’re in for a treat. The self-published novel by Andy Weir was a sci-fi phenomenon when it came out in 2011 and lots of people (myself included) were irritated that it couldn’t be considered for the Hugo award when it was republished in 2014. There’s already a movie–directed by Ridley Scott and starring Matt Damon–slated for release in the US on October 2, 2015. It also looks fantastic.

An article from MoviePilot.com goes even farther, however, and argues that “The Martian Heralds A New Era Of Realistic SciFi.” Here are some thoughts about this story, about sci-fi, and about humanity.

First, the book was great, but even as I was reading it I was pretty sure it would make an even better movie. It is really well-suited for visuals and would retain all of its punch even when shortened and simplified for screen. So, yay.

Second, I do hope that it heralds the dawn of some more realistic sci-fi. Don’t get me wrong: alien invasion stories are fun and FTL and artificial gravity2 are fine and dandy as plot devices go, but at a certain point I feel that scientific pseudobabble3 can kind of lead to all-around laziness. I mean, universal translators? They don’t even make sense conceptually. Sure, it may have been necessary for Star Trek, but it’s all the imitators who take the same liberties that drive me nuts. It’s not hard to see a trend from Star Trek to the absolute nadir of big-budget science fiction film (and the worst movie I have personally seen in my life): Wing Commander.

Finally, I also hope that realistic and popular sci-fi might lead to some renewed interest in space exploration. Because as it stands today, humanity kind of sucks on this front. No human being has been beyond low earth orbit in my lifetime. That’s really, really frustrating and should be a species-wide source of shame and humiliation. It’s not even close, by the way. That last time we (meaning: anybody) sent an astronaut outside of low earth orbit was Apollo 17. That’s 1972, people. Nineteen seventy-two. We’rec coming up on a half century since venturing outside of our atmosphere.4

You really need to see a picture to understand just how pathetic this is, so here you go:

That tiny smidgen of blue hugging the surface of the earth? That’s LEO. The green stuff is medium earth orbit. The red is high earth orbit. The moon–which, remember, we’ve been too once or twice–is way, way out beyond that. That’s how far we were able to go 50 years ago. And that’s how far we haven’t gone in my lifetime. And we call ourselves explorers? Adventurers? It’s a disgrace.

Oh, and while I’m venting, I may as well not hold back on this either. From the MoviePilot post:

There’s something simply satisfying about a survivor tale, and the idea of being marooned has intrigued writers for centuries. The Martian takes this concept and runs with it, propelling the age old tale to a new era by placing it in an interstellar setting. And with NASA scientists advising the screenplay, could The Martian help put the realism back into sci fi? [emphasis added]

The word “interstellar” has a meaning. It means “between stars.” Does Mars orbit a different star? No, it does not. So The Martian is interplanetary, not interstellar. In any other article I would have just rolled my eyes, but come on! The thesis of this article was realistic sci-fi and the very next sentence talks about “NASA scientists advising the screenplay,” but you could even get the word “interstellar” right?

OK, I’m going to go see if there are any kids on my lawn I can shake my cane at.

1 thought on “The Martian is Awesome, Humanity Less So”