I’m writing this post not as commentary but as one who doesn’t really know what to think about a topic. I’ve been contemplating for weeks now what exactly defines the limits of the law. We have various actions we consider immoral. Within immoral actions, some are illegal, and some are legal. Where do we draw the line? How do we decide which immoral actions to tolerate and which ones to outlaw? I will take for granted that no one here is Lord Devlin1 (or Judge Dredd) and simply does not believe the law has limits. 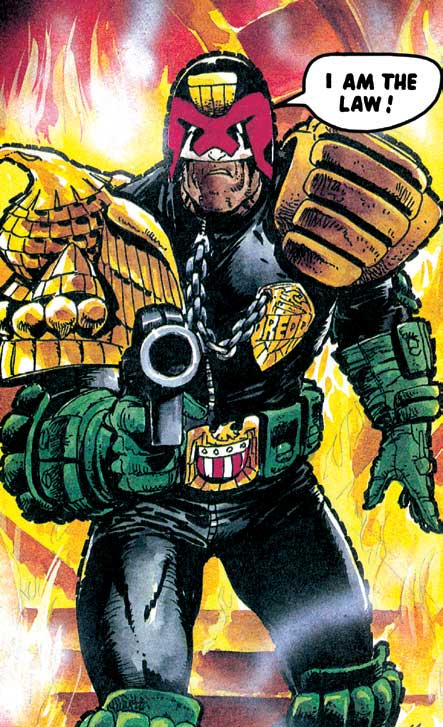 As the SEP entry on the limits of the law notes, the harm principle, as articulated by John Stuart Mill, is the best known answer. I know Nathaniel isn’t a big fan of the harm principle, but it does seem like a good place to start a conversation on the limits of the law. The Harm Principle may not end up fully capturing why we make some actions illegal and others not, but it does seem to define the most basic level of law. If absolutely nothing else, we have to keep Jones from murdering Smith.

If we accept the harm principle, the big question then is defining what exactly constitutes harm. Murder once more is a good place to start. Direct, grievous, bodily harm seems easy enough to identify as harm. But what about more diffuse harm like societal harm? If we do recognize diffuse, societal harm, how does one draw a line? We obviously cannot prevent all societal harm. How we do decide what to combat and what to leave alone? Is it simply another utility calculation of greater and lesser harms? And what of self-harm?

A further consideration is when, in attempting to prevent harm, we end up creating more harm instead. The SEP entry addresses this idea as well. Prohibition of alcohol increases alcohol consumption and adds criminal elements to a previously legal enterprise. Complete illegalization of prostitution drives vulnerable women furthe

r underground and away from law enforcement. To some extent, these problems can be avoided by more intelligent lawmaking (like the Nordic Model on prostitution, which protects prostitutes by making the purchase of sex illegal while the sale of sex is legal), but intelligent lawmaking can only go so far in the continual struggle with human nature. For example, I don’t think any amount of intelligent lawmaking would have made prohibition work. In effect, there seems to be a certain amount of pragmatism to lawmaking. We only have so many resources. We cannot change human nature. At what point do we surrender and accept a certain tolerable amount of harm?

Stepping away from the harm principle, what role does morally right action and social cohesion play in lawmaking? The idea (apparently called legal moralism) seems to have been totally banished from the modern mind (particularly proponents of the harm principle), but I don’t know if we can simply throw it out without a second thought. We shouldn’t go so far as Plato to suggest that the state should regularly and actively enforce the cultivation of moral virtue, to the point that there simply is no distinction between the moral and the legal, but I think there’s room in between Plato’s Republic on one end and a society whose laws are totally indifferent to virtue and social cohesion on the other end. Here I think Lord Devlin is more on target even if I don’t agree with his overall view:

For society is not something that is kept together physically; it is held by the invisible bonds of common thought. If the bonds were too far relaxed the members would drift apart. A common morality is part of the bondage. The bondage is part of the price of society; and mankind, which needs society, must pay its price.

I also suppose I tak

e the ancient view that virtue and social cohesion are one and the same. Moral virtue produces harmony both in the individual person and society at large. Immorality produces disharmony in both the soul and society. But, as mentioned earlier, I recognize the need for pragmatism in this matter. The attempted enforcement of virtue can and often does produce the opposite effect or simply no effect at all. So we get neither virtue nor social cohesion and we waste state resources to boot.

On the topic of legal moralism, the SEP entry starts hitting on a subject that does conflict me greatly, the topic of marriage. I realize people are a bit tired of this topic, but I think it’s greater fodder for contemplation on the limits of the law. On the one hand, I recognize marriage as having specific characteristics (monogamous, heterosexual, and permanent) and purposes (the good of the spouses and procreation of children). These characteristics and purposes are central to the well-being of both individual persons, especially children, and society in general. But then I jump over to another topic, contraception, where I believe a simultaneously personal and societal harm exists, and I have zero interest in making contraception illegal. So what gives? How do I differentiate any legal objections I might have to gay marriage or divorce or polygamy from my total legal acceptance of contraception?

I can already tell this entry is a bit of a mess. I’m jumping around, mixing and matching moral outlooks (like utilitarianism and more virtue-based outlooks), not defining or exploring presuppositions, etc. It’s pretty bad. But I think this mess is still useful for generating a discussion. Let me know what y’all think.

6 thoughts on “The Limits of the Law”