Republican presidential candidate Carly Fiorina made one thing crystal clear at the CNN debate. . . : progressivism no longer owns feminism. And it’s about time.

Thus writes Lisa Torcasso Downing in a post at Life Outside the Book of Mormon Belt. She goes on to decry the fact that conservative women have felt–because of the association between feminism and liberal/progressive politics–the need to abandon the movement (or at least the term), although she doesn’t necessarily blame them for doing so:

In general terms, feminism claims its goal is to broaden opportunity for women, but when most Americans hear the word “feminist,” they attach to the word tangential philosophies conservative women reject on intellectual, emotional, and spiritual levels, including socialism as an acceptable political framework for the U.S. and social justice as a means to equality.

Torcasso put’s her finger on exactly my reluctance–and the reluctance of a lot of men and women I know–to go near the term “feminist” with a 10-foot pole. Instead, however, feminism should be simply “The freedom to choose a life, a path, a journey, and an adventure according to the dictates of our own mind, will, conscience, and being.” Obviously Torcasso doesn’t expect for liberal feminists to get behind Fiorina, but she does conclude by saying that:

if you can’t look at Carly Fiorina on that stage, positioned beside ten prominent Republican men, and feel a little thrill that this woman is a viable candidate for the presidency of the United States, then your feminism is dead, strangled by the cords with which you have tied yourself to progressivism.

I want to add one more thing. A pro-life friend of mine recently shared this image on Facebook: 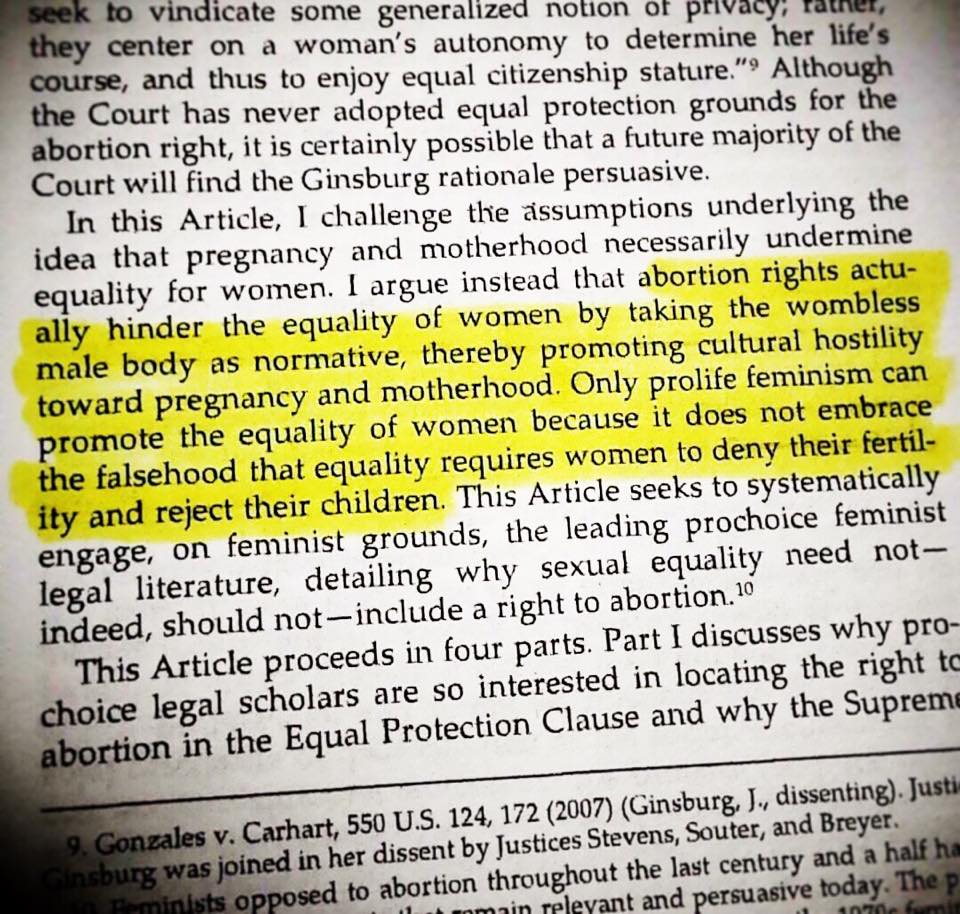 Liberal feminism is not just pro-woman. It has a whole set of attitudes and philosophical assumptions to go along with it and–even if you disagree with practically all of them (as I do)–they enrich the conversation. So that’s the additional loss that we all suffer due to feminism being more or less wholly subverted by left-wing ideology: there’s a whole continuum of feminist thought that is being silenced. There are attitudes and there are policies and there are insights that are only possible when one combines conservatism with feminism. Views like the one expressed in the quote above, which comes from the paper “Embodied Equality: Debunking Equal Protection Arguments for Abortion Rights” by Erika Bachiochi.

Papers like this one pose a vital question for liberal feminism: which is more important? Liberalism? Or feminism? All too often, the answer has been the former rather than the latter.

3 thoughts on “Because of Fiorina “Progressivism No Longer Owns Feminism””