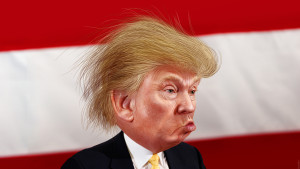 Well someone with more legitimacy (at least in the political world) has picked up my theory that DT is a plant for the Democrats.  I believe this theory because he has actually made me consider voting for Hillary, and that is a turn of events I find hard to believe.

Carlos Curbelo, a Republican congressman from Florida, has stated,

Along with the fact that Trump has said he will run as an independent if he doesn’t get the nomination, everything points to: plant.  Even his hair.  Or especially.

Please, spread this theory.  Make all your friends suspicious of DT, not just the sane ones.

4 thoughts on “Donald Trump: Plant for the Dems”