This post is part of the General Conference Odyssey series.

The 1949 film noir The Third Man—starring Joseph Cotten and Orson Welles and written by Graham Greene–is considered by many to be one of the greatest films ever made.1 Given the fact that the film came out nearly 70 years ago, I’m not overly concerned with spoilers. The movie centers on the supposed death of Orson Welles’ charming, but nefarious character Harry Lime, which we learn was faked due to Lime’s involvement in a penicillin racket. Given the scarcity of penicillin outside military hospitals in war-torn Vienna, Lime began selling stolen penicillin on the black market. However, Lime diluted his product, leading to the death of thousands of penicillin-dependent war victims. In one of the most famous scenes of the film, Lime meets with Cotten’s Holly Martins at the famed Wiener Riesenrad. Aboard the giant Ferris wheel, Martins attempts to talk some sense into his old friend. Unfortunately, he is unsuccessful:

Lime continues: “Nobody thinks in terms of human beings. Governments don’t. Why should we? They talk about the people and the proletariat, I talk about the suckers and the mugs – it’s the same thing. They have their five-year plans, so have I.” Martins responds with, “You used to believe in God.” Given Lime’s outlook in the clip above, his next response becomes all the more frightening: “Oh, I still do believe in God, old man. I believe in God and Mercy and all that. But the dead are happier dead. They don’t miss much here, poor devils.” The reason this is so frightening is summed up well by fellow DR contributor Allen Hansen in a blog post from a couple years ago:

What is particularly chilling about Harry Lime is that he still cares (somewhat) about (certain) people, he feels pity, and believes in God, yet makes a very profitable living from swindling children’s hospitals. Innocents die, and Harry knows. This is a very human evil, an evil that can be rationalised and made to fit- or improve- one’s lifestyle. Harry isn’t even exceptionally fearless or desperate, and he certainly isn’t certifiably insane. What Graham Greene does best, in my opinion, is to avoid black and white thinking when it comes to people, all the while never forgetting that there clearly is both good and evil, right and wrong. Evil is scary not because it is is distant and alien, but because it occupies the same sphere as we do. It could be present in our best friends, in our lovers, or scariest thought of all- it could even be part of ourselves. 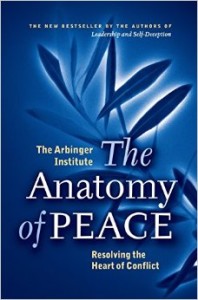 What Lime engages in is a kind of objectification or dehumanization of others. Flesh-and-blood human beings become mere abstractions, caricatures, or “dots.” I thought of this film as I was reading through the Arbinger Institute’s The Anatomy of Peace. It is a modern fable that is used to relay concepts for conflict resolution.2 It explores the various ways in which we delegitimize and eventually dehumanize those we don’t know, those we work with, and those even within our own families (what the book calls being “in the box”). Most of us recognize what the story describes as the “better-than box” as the most common form–if not the only form–of dehumanization: I am superior or better than another. I am more important or perhaps more virtuous. By implication, they are inferior, irrelevant, and wrong. The other methods of dehumanization, however, are a bit more subtle and easily overlooked. The “I-deserve box” views oneself as victimized, entitled, and unappreciated, and therefore sees everyone else as mistreating, ungrateful, and unfair. The “must-be-seen-as box” requires one to be thought of well, to play a role. This turns everyone else into an audience; a threatening, dangerous, and judgmental one at that. Finally, the “worse-than box” beats oneself down as broken and deficient. This automatically makes others privileged and advantaged. These worldviews lead to feelings of indifference, disdain, anxiety, or bitterness. To move out of “the box” toward people is not so much a way of acting (though this is obviously important) as it is a way of being. Genuine connection with others requires that we recognize their inherent worth and dignity as people and as individuals. This is the anatomy of peace. This is what love starts to look like.

Thomas S. Monson’s story about a boy Jack and his father in the 1971 April conference reminded me of the content above. As Jack storms out of the house following a quarrel, his father calls out to him, “Jack, I know that a large share of the blame for your leaving rests with me. For this I am truly sorry. I want you to know that if you should ever wish to return home, you’ll always be welcome. And I’ll try to be a better father to you. I want you to know that I’ll always love you.” The words later ring in Jack’s ear as he rides the bus to his distant destination, inspiring him to return home and reconcile with his father. “Here,” says Monson, “was a father who, suppressing passion and bridling pride, rescued his son before he became one of that vast “lost battalion” resulting from fractured families and shattered homes. Love was the binding band, the healing balm. Love—so often felt; so seldom expressed.” Jack’s father stepped outside of “the box” in order to truly see his son. He could have easily painted Jack as wrong, ungrateful, disrespectful, a burden, but he didn’t. Instead, he tried to be with him. In the Book of Mormon, Alma preached that to be baptized was to covenant to “to mourn with those that mourn; yea, and comfort those that stand in need of comfort” (Mosiah 18:9). In both Christ’s Sermon on the Mount in Matthew and Sermon at the Temple in 3 Nephi, he states, “Blessed are the peacemakers, for they shall be called the children of God. Blessed are they which are persecuted for righteousness’ sake: for theirs is the kingdom of heaven” (Matt. 5:9; cf. 3 Nephi 12:9). Notice the similarities of His teaching and the blessings toward the end of the same chapters: “Love your enemies [who else do we really make peace with?], bless them that curse you, do good to them that hate you, and pray for them which despitefully use you, and persecute you; that ye may be children of your Father which is in heaven…Be ye therefore perfect, even as your Father which is in heaven is perfect” (Matt. 5:44-45, 48; cf. 3 Nephi 12:44-45, 48). “As the context makes clear,” writes New Testament scholar Craig Evans, “the imperative “Be perfect” means to demonstrate a complete love, a love that expresses itself toward enemies as well as toward family and friends. This is the kind of love that our heavenly Father has.”3 Is there a better example of “mourning with those who mourn” than the Savior’s Atonement when he “descended below them all” (D&C 122:8)? Did he not die for “the natural man” (i.e. all of us), which “is an enemy to God” (Mosiah 3:19)? Implicit in John’s declaration that “God so loved the world, that he gave his only begotten Son” (John 3:16) is the notion that God thought “the world” was worth saving despite being under the control of Satan (see John 12:31; 14:30; 16:11).4 This is why Monson states, “In reality, each one of us is numbered in what could well have been the lost battalion of mankind, even a battalion doomed to everlasting death.” With the angel’s pronouncement at Christ’s empty tomb, “the “lost battalion” of mankind—those who have lived and died, those who now live and one day will die, and those yet to be born and yet to die—this battalion of humanity lost had just been rescued.” Monson reminds us to follow Christ and seek to rescue other “lost battalions” such as “the handicapped, even the lame, the speechless, and the sightless…the aged, the widowed, the sick…mothers and fathers, sons and daughters, who have, through thoughtless comment, isolated themselves from one another.” And finally, those that “struggle in the jungles of sin” or “wander in the wilderness of ignorance.”

I think Monson’s story connects well with a couple other talks from the Tuesday morning session on the importance of family. Not merely the form of family, but its potential and necessary power. James Cullimore lays out the Church’s position quite well when he says, “Marriage is a sacred relationship entered into primarily for the rearing of a family, in fulfillment of the commandments of the Lord. Marriage with children, and the beautiful family relationship which can come of it, is the fulfillment of life” (italics mine). This last part is reinforced by a quote from President Joseph Fielding Smith that Cullimore employs: “[Marriage] is the foundation for eternal exaltation, for without it there could be no eternal progress in the kingdom of God” (italics original). The why behind marriage and family is beautifully laid out by Marion D. Hanks. Setting aside the “duty or commandment or admonition” of family life, Hanks instead “speak[s] of invitation, of opportunity, of privilege, of love, of gratefully taking time while there is time to enjoy the blessing of our family and home. How much joy are we missing that we could be having and are meant to have, joy that we could experience only in our own home and no other place, only with our own family and with no other group?” In my interpretation of Hanks’ remarks, marriage and family provide the context for divinization (“eternal exaltation”). It is where we (should) learn to be godly:

Kindness, consideration, courtesy, care, laughter, unselfishness, prayer, thoughtfulness, doing things for each other, forgiving each other, sustaining each other, loving each other—these are notes that form a family symphony happily enjoyed and eternally remembered. If a family loses its cherished human values and deteriorates into only the form of a family, it has lost what a family is for. Whatever changes are said to have occurred in our time, there is left to the family the most important purpose of all—the satisfaction of the basic emotional and spiritual needs of its members. In any era, one has written, society is a “web of which the family forms the central strands.” In home, family, and love lie the resources that fulfill the life of the individual and the life of the community; indeed, the resources that would redeem our troubled world and bring it lasting peace. Children must be safeguarded and reared. Only in the home can children be assured of the love and direction they need to live life, and only parents who genuinely love can meet those needs. But it must be more than a preached or pronounced love; it must be love that takes time, makes the effort, listens patiently, gives freely, forgives generously, “provides the amenities that will grace and adorn and make beautiful the relationships of family life” (bold mine).

To move out of “the box” is to recognize the basic emotional and spiritual needs of others and then seek to meet them. And it is within the family that we first learn this fundamental attribute of divinity.

To say the least, the last three talks of the Tuesday morning session gave me quite a bit to chew on.5

These are the other posts from the General Conference Odyssey this week:

5 thoughts on “Escaping “The Box” Through Families”