Social psychologist Jonathan Haidt and the Cato Institute’s Emily Ekins have an incredible article on the moral psychology of different candidate supporters. The two begin with the 6 major moral foundations:

In the graph below you can find how supporters of the various candidates scored: 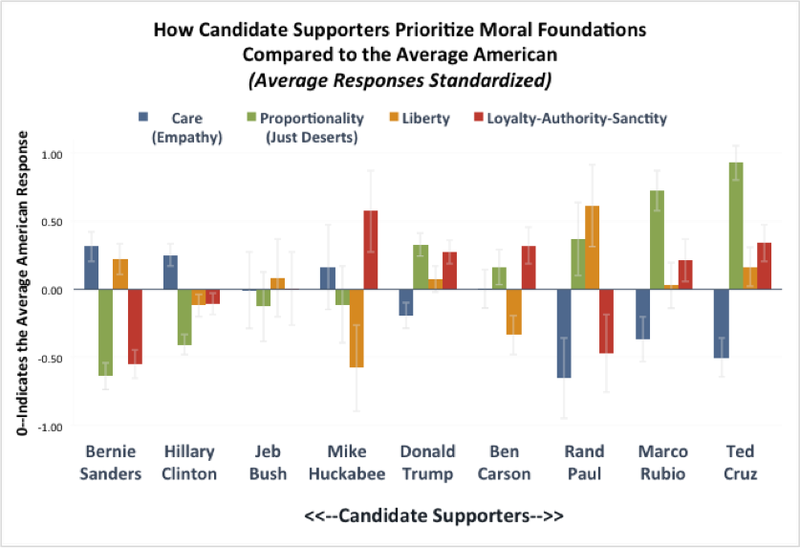 Here are some highlights from Haidt and Ekins:

But perhaps the biggest surprises?:

One surprise in our data was that Trump supporters were not extreme on any of the foundations. This means that Trump supporters are more centrist than is commonly realized; consequently, Trump’s prospects in the general election may be better than many pundits have thought. Cruz meanwhile, with a further-right moral profile, may have more difficulty attracting centrist Democrats and independents than would Trump.

One last interesting finding: Jeb Bush supporters are closest to the average American voter, despite the fact that his campaign has thus far has failed to gain any traction among Republican primary voters.

Bush’s failures may have more to do with his poor debate performances than with his moral profile, but in this time of high and rising polarization, cross-partisan hostility, and anger at elites and the establishment, Bush appears to be suffering from an excess of agreeability: He has no standout moral message that connects to any particular moral foundation, even at the risk of alienating supporters of another.