In Michael Shermer’s book The Moral Arc, he has a section in which he discusses restorative justice vs. retributive justice. Retributive justice is a “theory of justice that considers proportionate punishment to be the most effective means of deterring crime…” Restorative (or reparative) justice is a theory in which the “perpetrator…apologizes for the crime; attempts to set to rights the situation; and, ideally, initiates or restores good relations with the victim” (pg. 371). The notion of rehabilitation over punishment is gaining momentum among prison reform movements. One example is the Insight Prison Project, a program that “aims to help incarcerated men learn new emotional skills and correct problem behaviors in order to succeed in and out of prison. IPP offers a multipronged approach to personal transformation, including classes in violence prevention, yoga, and mindfulness. It also brings victims and survivors together with inmates, so that the men can be exposed to the human impact of the types of crimes they’ve committed. 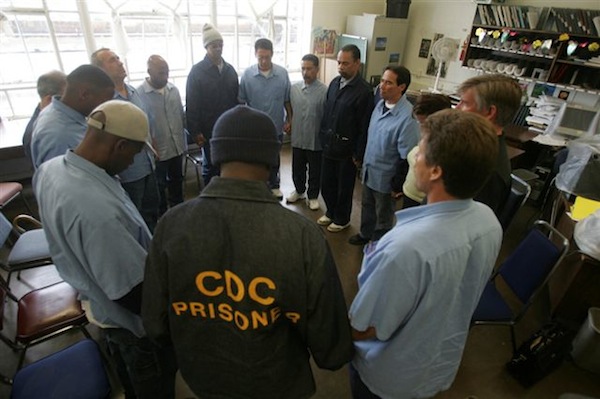 The process doesn’t just help the inmates to grow. It can also help the survivors.” Prisoners go through “an intensive, yearlong program designed to help them open up, learn to trust each other, and take greater responsibility for the harm they’ve caused. They explored how crime impacts everyone—not just the direct victims, but the victims’ spouses, children, parents, and communities—while developing empathy for victims through directed exercises. They also learned about the effects of childhood trauma and abuse and how these experiences may have impacted their personal psychology, all the while developing skills like emotional regulation and anger/stress management.” In 1997, “the San Francisco County Sheriff’s Department ordered Wash­ington into a jail program called RSVP: Resolve to Stop the Violence Project. In his ﬁrst week there he met a former skinhead, Aaron Mosco­vitz, who had already undergone a dramatic transformation through the program. Moscovitz went from perpetrating violent hate crimes to becoming a public speaker against violence. If the program could take violent racists like Moscovitz and return them to society reformed and peaceful, Washington was curi­ous about what the program could do for him.” The exciting part is that this kind of approach actually works: a 2013 meta-analysis found that restorative justice programs were more cost-effective, led to a decrease in post-release recidivism, and greater victim satisfaction.

I think restorative justice is an excellent way to describe Victor Brown’s talk in the October 1971 Conference. He begins,

In June of this year I was invited to attend a graduation exercise conducted by the LDS Institute of Religion and Church Social Services Department held at the Utah State Prison. Seventeen men received certificates of award: nine received their first-year certificates, five their second-year, and three their third. Twenty-four others had participated in religion classes but did not quite qualify for certificates.

As I recall, only two had been released from prison and had returned that evening to receive their certificates. All of the others were inmates. Many of them were not members of the Church.

One would hardly expect in the environment of the prison to hear the beautiful, stirring hymns “I Need Thee Every Hour” and “Sweet Hour of Prayer.” They were sung by two choruses composed of white and black prisoners.

Men dressed in prison uniforms offered humble, sincere prayers to God, expressing gratitude for their blessings and for the knowledge they now have of his gospel. Several stood at the pulpit and testified that they know God lives, and expressed gratitude for his goodness to them. May I tell you of just two of these men—men whose lives were seriously out of step with society; men with internal, personal problems that really are not much different from those of many who have never been in prison.

One prisoner Brown describes gave up coffee and smoking, “became involved in the various religious programs sponsored by the Church social service agency,” and felt loved “as a son” by his home teachers, “something he had never experienced in his life, even as a little boy.” And this was only “[a]fter a few weeks of exposure to the program of the Church specially designed for prison life…” Another inmate “had some particularly wonderful home teachers who occasionally brought their own children to the prison to have family home evening with him. The children consider Ed as an older brother.” Following his release, he was invited to speak at the program’s graduation service. He held up a piece of paper for the audience to see and said, “You probably can’t read this, but this is the most important document in my life. This is my baptismal recommend that will permit me to be baptized next Thursday.” He was baptized. “After his confirmation, he walked over to a corner of the room where he could be alone and wept. He wept even more when he was ordained a deacon in the Aaronic Priesthood.”

Certainly these young men were faced with serious problems. Yes, they had lost their physical freedom by being confined in jail, but this was not the basic problem. Even more serious was the lack of purpose in their lives. They had no place to go. They were lost. Life had no meaning. They had no idea why they were here on earth or where they were going.

Release from the prison would not begin to solve their most urgent problems; and yet, in the environment of prison, they found the release that could ultimately make them truly free men. They found their Savior, Jesus Christ, and his gospel.

And this gospel was brought to them by others. May we seek to be more Christian not only to those whom we think deserve it, but to those who may actually need it more:

“When the foundation [of the Salt Lake temple] was being laid, we are told that it was sixteen feet wide, and at one time President Brigham Young came and saw the workmen throwing in chipped granite. He made them take it out and put in those great granite blocks with this explanation: “We are building this temple to stand through the millennium.” Isn’t that a good thought? Each one of us ought to want to build our lives and help our families to build their lives so that we can stand through the millennium.”

I was tempted to write about Tuttle’s talk and the modern gospel of busyness:

“Note again the admonition [of D&C 121:34-35]: “their hearts are set so much upon the things of this world”—not on the things of the spirit. And they “aspire to the honors of men,” rather than seeking approval of God. Have we sought “so much” for material things while missing, even ignoring, the things of God? The beauty of nature at this or any other season goes unseen and unappreciated. Our lives are ruled by a schedule and appointments while the Christian acts of kindness wait—ofttimes in vain.”

“The trials through which today’s young people are passing—ease and luxury—may be the most severe test of any age.”

“The responsibility rests on the family to solve our social problems. Youth search for security. They search for answers to be found only in a good home. No national or international treaty can bring peace. Not in legislative halls nor judicial courts will our problems be solved. From the hearthstones of the homes will come the answers to our problems. On the principles taught by the Savior, happiness and peace will come to families. In the home youth will receive strength to find happiness.”1

“[A] home where the accumulation of worldly goods has become so important…is a poor place to teach the worth of a human being in terms of love and sacrifice.”2

7 thoughts on ““Unto One of the Least of These””