While reading through a Facebook argument on modesty (my time could have been better spent, I know), I realized that for those who hate modesty, their arguments are equivalent to those who hate political correctness (that’s not the right phrase, anymore, right? I can’t keep up.) The argument is pretty much summed up by “What I do isn’t about you and doesn’t affect you, and if it does affect you, fix yourself, not me.” It’s a very come-together, selfless, flower-and-rainbows kind of argument, amirite?

Often I see the same people who argue against modesty also argue for an end to offensive speech, and vice versa. But really both groups of people have picked their preferred form of modesty, will accept no less, and think your form of modesty is oppressive, wrong, and maybe even evil.

The truth is modesty covers both dress and speech because it covers appearance and behavior. And, like it or not, modesty is intertwined with respect. Because what we do and say affects who we are and also affects the way people perceive us. (Clearly our dress is only a small part of what we do.) We aren’t just inanimate blobs floating around that no one can see or hear (and therefore never be offended by us). To say our speech or our dress doesn’t matter because “I’ll do what I want” is not going to engender a polite society.

I also don’t think we should spend much time policing one another (this is my hope that the internet shuts up, I know, very likely). There are always lines to be drawn. But if you really cling to wear whatever you want/say whatever you want or cover every inch/zip your lip, you’re probably being too inflexible and should chill a bit. 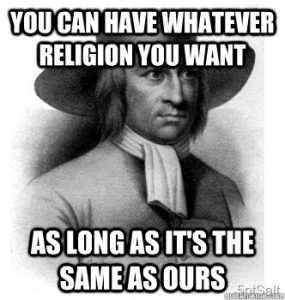 Nicely dressed meteorologists don’t need to put a sweater on, but we don’t need to see celebrities naked (or even nearly-naked) selfies (sorry, no link). College graduates don’t need protection from Secretaries of States from politically different administrations, but women should not be harassed online for doing their jobs.

Overall, if you spend any time on the internet, you should realize that many aspects of our society could benefit from a little modesty. But that doesn’t mean we all need to become Puritans.