According to sociologist Nicholas Wolfinger,

By the 2010s, only 5 percent of new brides were virgins. At the other end of the distribution, the number of future wives who had ten or more sex partners increased from 2 percent in the 1970s to 14 percent in the 2000s, and then to 18 percent in the 2010s. Overall, American women are far more likely to have had multiple premarital sex partners in recent years (unfortunately, the NSFG doesn’t have full data on men’s premarital sexual behavior, and in any event they recall their own marital histories less reliably than do women).

As premarital sex became more acceptable, it’s reasonable to anticipate that its negative effects on marital stability waned. In general, Americans became more accepting of nonmarital sex. Certainly fewer men entered marriage with the expectation of a virgin bride. All of the fanfare associated with hooking up is evidence that some young people have become comfortable with the idea of sex outside of serious relationships.

Be that as it may, this prediction is only partially borne out by the data shown in Figure 1. The following chart depicts the percentage of first marriages ending in divorce within five years of wedlock according to the decade the wedding took place and how many sex partners a woman had prior to marriage. Consistent with prior research, those with fewer sex partners were less likely to divorce. 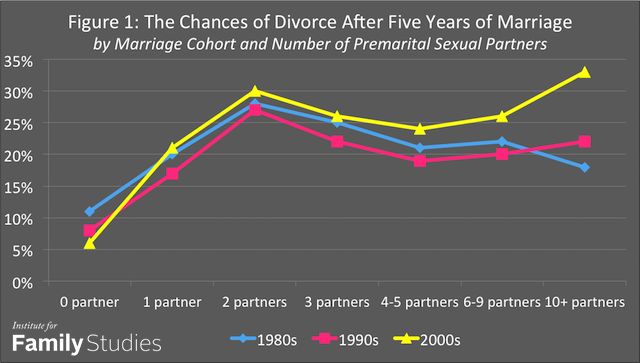 Of course, the percentage drop after 2 partners raises even more questions in the complicated relationship between premarital sexual activity and marriage/divorce.1

3 thoughts on “What Are the Effects of Premarital Sex on Marriage?”