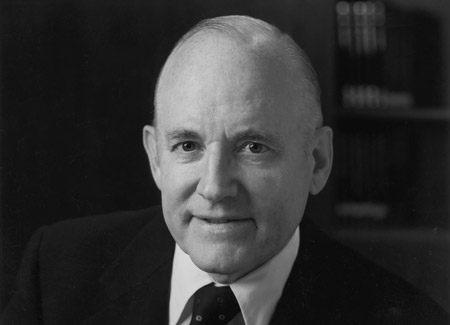 I didn’t really understand the sadness other Mormons felt when Ezra Taft Benson passed away in 1994, but their obvious connection to the then President made me look forward to feeling the same kind of bond with the next man to take up that mantle: Howard W. Hunter. Sadly, his tenure lasted less than a year, and virtually all I remember is that his unofficial them was temples.

So it was particularly interesting to me that the talk that struck me the most from the Saturday morning session of the October 1973 General Conference was (1) by Elder Hunter and (2) not directly about temples at all. Instead, in Of the World or of the Kingdom?, he talked about the conflicts between the unchanging gospel and the transient philosophies and institutions of late 20th century America.

The warnings were familiar. For example:

In this day of increased knowledge, higher thought, and a modernization of the old, the simple has been overlooked and the profound sought after. The basic, simple, fundamental truths of the gospel are being ignored.

Still, Elder Hunter’s specific views on the topic were like a unique improvisation on a familiar theme, with different emphases and nuances than what other leaders have said before. This is important, because we have to see the differences in order to recognize the commonalities, and the commonalities are the most important aspects of the General Conference talks.1

So, here’s one paragraph that struck me as worth paying particular attention to:

I believe we can be modern and enjoy the fruits of a modern world and its high standard of living, and I believe we can have the benefits of modern scholarship and scientific advances without turning to the theories of the modernist. I believe the principles of the gospel announced by the Savior in his personal ministry were true when they were given and are true today. Truth is eternal and never changing, and the gospel of Jesus Christ is ever contemporary in a changing world.

I like the optimism here, and the dogged insistence that being “not of this world” doesn’t entail abdicating either the blessing of a “scientific advances” or “modern scholarship.” The tension between religious believers (of all traditions) and the larger society often leads to monasticism in one form or another, but Mormonism aims to engage with the world, not withdraw from it. It’s just up to us, I think, to articulate why and how “the gospel of Jesus Christ is ever contemporary.”2

And here’s another paragraph, near the end of the talk, that I liked a lot:

I’m definitely looking forward to reading more talks by President Hunter and getting to know better a leader that was not with us for long enough for me to get to know him in life.

2 thoughts on “The Kingdom or the World”