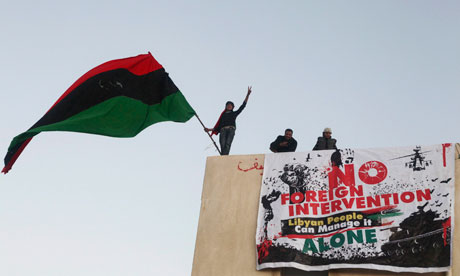 Stephen Walt, the Robert and Renée Belfer professor of international relations at Harvard University, has an older, but still incredibly relevant article in Foreign Policy on the social science of military interventions. “Before France, Britain, and the United States stumbled into its current attempt to dislodge Muammar al-Qaddafi from power in Libya,” asks Walt,

…did anyone bother to ask what recent social science tells us about the likely results of our intervention?

I doubt it, because recent research suggests that we are likely to be disappointed by the outcome. A 2006 study by Jeffrey Pickering and Mark Peceny found that military intervention by liberal states (i.e., states like Britain, France and the United States) “has only very rarely played a role in democratization since 1945.” Similarly, George Downs, and Bruce Bueno de Mesquita of New York University found that U.S. interventions since World War II led to stable democracies within ten years less than 3 percent of the time, and a separate study by their NYU colleague William Easterly and several associates found that both U.S and Soviet interventions during the Cold War generally led to “significant declines in democracy.” Finally, a 2010 article by Goran Piec and Daniel Reiter examines forty-two “foreign imposed regime changes” since 1920 and finds that when interventions “damage state infrastructural power” they also increase the risk of subsequent civil war.

Drawing on then unpublished work by political scientist Alexander Downes, Walt explains “that foreign intervention tends to promote stability when the intervening powers are seeking to restore a previously deposed ruler. But when foreign interveners oust an existing ruler and impose a wholly new government (which is what we are trying to do in Libya), the likelihood of civil war more than triples.” The regime change “disrupts state power and foments grievances and resentments” and increases the probability of civil war. Another paper by Downes found that “states that have their governments removed by a democracy gain no significant democratic benefit compared to similar states that do not experience intervention.”

With Clinton owning Libya–as even leftist outlets have acknowledged–this information becomes all the more timely and important.1 Something both conservatives and liberals should take into account.