You know how I’ve been preaching against zoning laws over the last year? Well, allow me to do so again.

According to Richard Reeves and Dimitrios Halikias at the Brookings Institution, “the movement of less-skilled workers to higher-growth areas has not risen in recent years, a break with the historical pattern[.]” It seems that regulation is the culprit. “The number of court cases mentioning “land use” (an innovative measure of regulation used in a Hutchins Center working paper by Peter Ganong and Daniel Shoag) has risen steadily:” 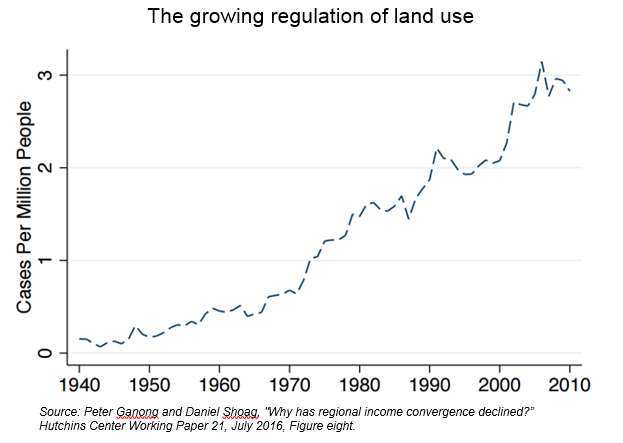 “The Hutchins paper,” the authors continue, “complements earlier economic analyses, including a study published last year by Chang-Tai Hsieh and Enrico Moretti which estimates that the U.S. economy is 14 percent smaller as a result of constraints on housing development…By using local government powers to zone out lower-income families, upper middle class Americans protect the value of their homes. (Federal policy helps, of course, by regressively supporting richer home owners through mortgage interest deductions.)” Zoning acts as a kind of “opportunity hoarding,” even when it comes to elementary education:

According to Jonathan Rothwell, there is a strong link between zoning and educational disparities. Homes near good elementary schools are more expensive: about two and half times as much as those near the poorer-performing schools. But in metropolitan areas with more restrictive zoning, this gap is even wider. Loosening zoning regulations would reduce the housing cost gap and therefore narrow the school test-score gap by 4 to 7 percentiles, Rothwell finds.