Philosopher Joseph Heath has an enlightening working paper on the economics and ethics of climate change. Heath is emphatic that his goal is

not to make a case for the importance of economic growth, but merely to expose an inconsistency in the views held by many environmental ethicists. Part of my reason for doing so is to narrow the gap somewhat, between the discussion about climate change that occurs in philosophical circles and the one that is occurring in policy circles, about the appropriate public response to the crisis. One of the major differences is that the policy debate is conducted under the assumption of ongoing economic growth, as well as an appreciation of the importance of growth for raising living standards in underdeveloped countries. The philosophical discussion, on the other hand, is dominated by the view that ongoing economic growth is either impossible or undesirable, leading to widespread acceptance of the steady-state view. This view is, however, a complete non-starter as far as the policy debate is concerned, because it is too easily satisfied. As a result, its widespread acceptance among philosophers (and environmentalists) has led to their large-scale self-marginalization (pg. 31).

Drawing on the economic research of economists Nicholas Stern and William Nordhaus, Heath proceeds to point out how misleading language often distorts and exaggerates the negative impact of climate change:

Stern adopts a similar mode of expression when he suggests that “in the baseline-climate scenario with all three categories of economic impact, the mean cost to India and South-East Asia is around 6% of regional GDP by 2100, compared to a global average of 2.6%.” The casual reader could be forgiven for thinking that the reference, when he speaks of “loss in GDP per capita,” is to present GDP. What he is talking about, however, is actually the loss of a certain percentage of expected future GDP. In some cases, he states this more clearly: “The cost of climate change in India and South East Asia could be as high as 9- 13% loss in GDP by 2100 compared with what could have been achieved in a world without climate change.” The last clause is of course crucial – under this scenario, GDP will not be 9-13% lower than it is right now, but rather lower than it might have been, in 2100, had there not been any climate change…In other words, what Stern is saying is that climate change stands poised to depress the rate of growth. This type of ambiguity has unfortunately become common in the literature. An important recent paper in Nature by Marshall Burke, Solomon M. Hsiang and Edward Miguel, estimating the anticipated costs of climate change, presents its conclusions in the same misleading way. The abstract of the paper states that “unmitigated climate change is expected to reshape the global economy by reducing average global incomes by roughly 23% by 2100.” The paper itself, however, states the finding in a slightly different way: “climate change reduces projected global output by 23% in 2100, relative to a world without climate change.” Again, that last qualifying clause is crucial, yet it was the unqualified version of the claim found in the abstract that made its way into the headlines, when the study was published (pgs. 15-16).

these potential losses are enormous, and they call for a strong policy response in the present. At the same time, what these economists are describing is not a “broken world,” in which “each generation is worse off than the last.” On the contrary, they are describing a world in which the average person is vastly better off than the average person is now – just not as well off as he or she might have been, had we been less profligate in our greenhouse gas emissions. It is important, in this context to recall that annual rate of real per capita GDP growth in India, at the time of writing is 6.3%, and so what Stern is describing is, at worst, the loss of approximately two years worth of growth. At the present rate of growth, living standards of the average person in India are doubling every 12 years. There are fluctuations from year to year, but the mean expectation of several studies, calculated by William Nordhaus, suggests that the GDP of India will be about 40 times larger in 2100 than it was in the year 2000 (which implies an average real growth rate of 3.8%). The 9-13% loss, due to climate change, is calculated against the 40-times-larger 2100 GDP, not the present one (pg. 16-17). 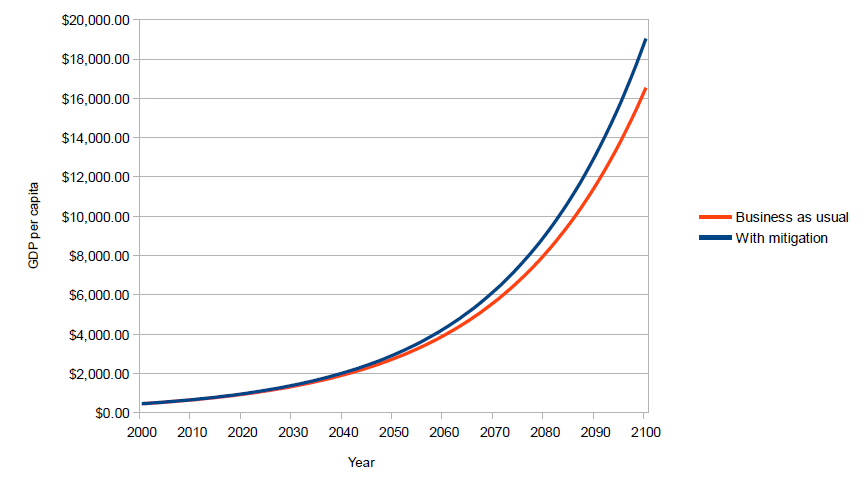 The full paper has more details and additional arguments. But this is the kind of serious cost/benefit analysis we need to be having about climate change.