The pro-institution case for increased immigration continues to get better. A new working paper by Benjamin Powell and others looks to Israel as a natural experiment. From the abstract:

The relaxation of emigration restrictions in the Soviet Union and the State’s subsequent collapse led to a large exogenous shock to Israel’s immigrant flows because Israel allows unrestricted immigration for world-wide Jews. Israel’s population increased by 20 percent in the 1990s due to immigration from the former Soviet Union. These immigrants did not bring social capital that eroded the quality of Israel’s institutional environment. We find that high quality political institutions were maintained while economic institutions improved substantially over the decade. Our case study finds that the immigrants played an active role in this institutional evolution and we also employ a synthetic control to verify that it is likely that the institutions improvement would not have occurred to the same degree without the mass migration. 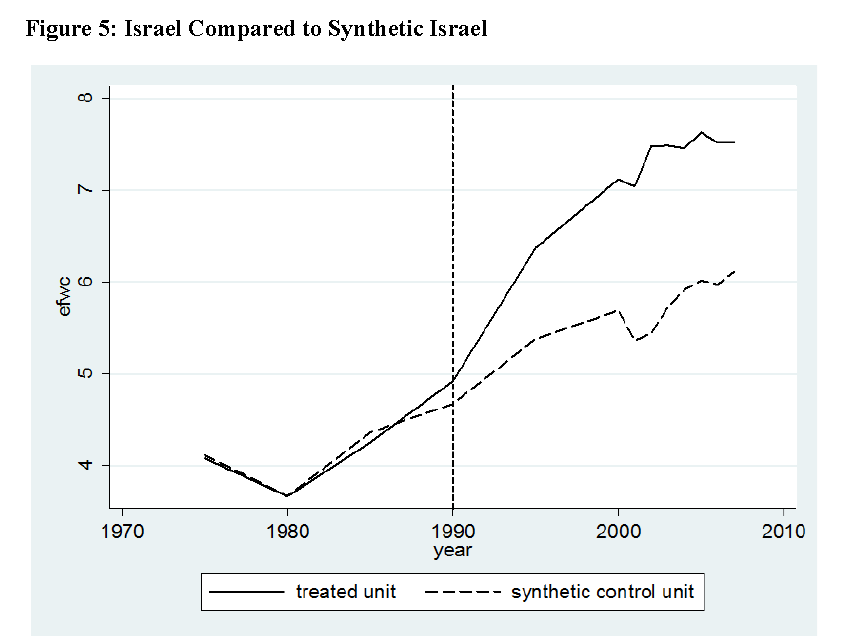 This finding in no way proves that in every case unrestricted migration would not harm destination country institutions. However, as a complement to Clark et. al. (2015) that found in a-cross country empirical analysis that existing stocks and flows immigrants were associated with improvements in economic institutions, it should increase our skepticism of claims that 26 unrestricted migration would necessarily lead to institutional deterioration that would destroy the estimated “trillion dollar bills” that the global economy could gain through much greater migration flows (pgs. 25-26).