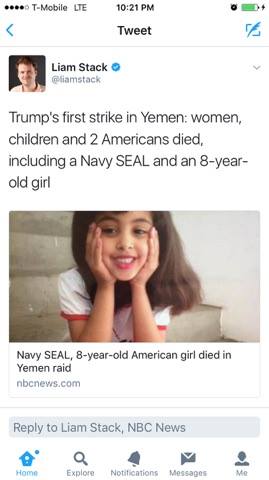 As a friend of mine said in response to this Tweet, “The left is anti-drone bombing once again. Welcome home after 8 years.” Now, if you think his quip is unfair, it should be noted that it’s based on sound social science: the majority of anti-war Democrats of the Bush years weren’t really all that anti-war as much as they were anti-Bush. As soon as Obama took office, the opposition dropped considerably.

But to wake people up to the reality of the continued violence, here are the estimates of total bombs dropped by the U.S. in 2016:

In President Obama’s last year in office, the United States dropped 26,172 bombs in seven countries. This estimate is undoubtedly low, considering reliable data is only available for airstrikes in Pakistan, Yemen, Somalia, and Libya, and a single “strike,” according to the Pentagon’s definition, can involve multiple bombs or munitions. In 2016, the United States dropped 3,028 more bombs—and in one more country, Libya—than in 2015.

Micah Zenko of the Council on Foreign Relations points out,

As Donald Trump assumes office today, he inherits a targeted killing program that has been the cornerstone of U.S. counterterrorism strategy over the past eight years. On January 23, 2009, just three days into his presidency, President Obama authorized his first kinetic military action: two drone strikes, three hours apart, in Waziristan, Pakistan, that killed as many as twenty civilians. Two terms and 540 strikes later, Obama leaves the White House after having vastly expanding and normalizing the use of armed drones for counterterrorism and close air support operations in non-battlefield settings—namely Yemen, Pakistan, and Somalia.

…Less than two weeks ago, the United States conducted a drone strike over central Yemen, killing one al-Qaeda operative. The strike was the last under Obama (that we know of). The 542 drone strikes that Obama authorized killed an estimated 3,797 people, including 324 civilians. As he reportedly told senior aides in 2011: “Turns out I’m really good at killing people. Didn’t know that was gonna be a strong suit of mine.”

This is what leads Nathan Robinson at Current Affairs to chastise his fellow leftists:

The newspaper headlines today all blare shocking reports about Trump’s continued bigotry. But further down the page, a different story about Muslim lives is receiving far less attention: the U.S. bombing of Syria, and its increasing numbers of civilian casualties. While Trump says racist things about Muslims, U.S. warplanes are actually killing them, something far less discussed even though (or perhaps because) it morally implicates Democrats.

The U.S. has also been accused of concealing the true death toll…[But i]t’s also important to remember that death tolls themselves only begin to capture the scale of a bombing’s impact. The numbers of injuries are often far higher (and frequently unreported). “Injuries” can mean lost limbs, blindness, and paralysis. They can mean permanent disfigurement. They can mean that a person will never work again, and will suffer from depression and PTSD, or will require medical care for the rest of their lives. Furthermore, even those who are not “injured” can experience deep and lasting trauma, after seeing loved ones or even strangers torn to shreds before their eyes. The actual pain of a mother realizing her child has been blinded, or a brother watching his sister die, is absent from death toll statistics.

The complaint of human rights advocates has centered around the fact that the United States is downplaying and concealing casualties, and that the deaths are growing in frequency without any justification…All of this occurred under a Democratic president. So while the organizers of the Democratic National Convention where proudly presenting the Khan family as evidence of their superior devotion to Muslim lives (and while DNC attendees were chanting “USA, USA, USA” as if they were frenzied 2004-era Bush Republicans), the Obama administration was directly responsible for killing scores of living, breathing Muslim civilians. While Democrats were voicing their outrage that Donald Trump had said yet another despicable racist thing, the party was speaking up in defense of a candidate who had decimated a Muslim country, and who had actually voted for the senseless war that killed Cap. Kahn in the first place.

Of course, this by no means lets Republicans off the hook. Nor does it equate Obama and Trump (or the GOP) or fail to recognize the nuances of war. It shouldn’t dampen our optimism about the decline of war and violence in the modern era either. But it does call for some consistency; to minimize selective outrage. If we treated all administrations like public servants accountable to us instead of celebrities on our favorite football team, some of this might have been avoided.1