This is part of What I’m Watching. 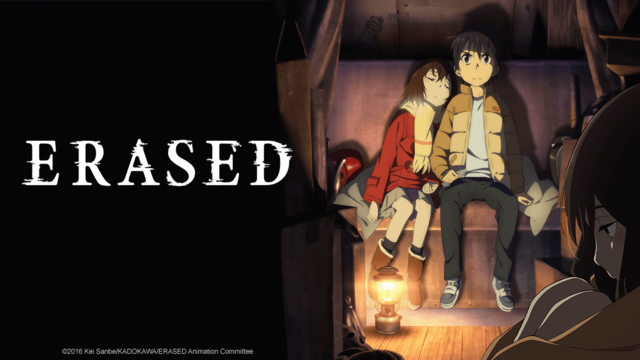 I never really watched anime growing up. In my mind, anime was equivalent to Pokemon and I wasn’t having any of that.1 Plus, the “weird” kids watched anime.2 I saw maybe two or three anime films as a kid, all by Miyazaki.3 As an undergrad, I watched the series Moshidora. But this was due to its connection to Peter Drucker, not out of any interest in anime (though I really enjoyed the series). It wasn’t until I was graduated, working, and married that I started taking a slight interest in anime. I remember doing a Miyazaki binge4 after Nathaniel recommended Nausicaa of the Valley of the Wind, followed by a couple of non-Miyazaki Studio Ghibli films.5

But it wasn’t until last year’s Your Name that I started really paying attention to anime. After binging several series (some of which I’ll likely touch on here at Difficult Run), I was in search of a new one to watch. I came across Erased (the Japanese title translates literally as “The Town Without Me“) as I was looking up well-reviewed anime series and decided–against my better judgment–to check out the first 25-minute episode around 10pm. You know, something to watch before I went to bed. By 3am, I had finished the 12-episode season and then got up at 6am for work. Because I’m stupid. And because it was that good.

The story follows Satoru, a 29-year-old loner who experiences what he calls “Revival”: jumps backward in time–signaled by a mystic blue butterfly–moments before deadly events occur. These “revivals” are usually only about 1-5 minutes. However, when his mother (a former journalist) digs up an old kidnapping case and is herself murdered by the kidnapper,6 Satoru’s revival takes him back 18 years to grade school prior to the original kidnappings that set all of the story’s events in motion. As a child with the memories of his 29-year-old self, Satoru seeks to befriend the kids that would eventually end up as victims in an attempt to save them and catch the killer. While the series is wracked with tension from the unfolding murder mystery, the emotional resonance is particularly potent7 as the show delves into the subjects of loneliness, abuse, and finding joy in the relationships we create.

Despite some weak portions,8 the series had me both on edge and in tears. Highly recommended.