RAND’s extensive report does not make any sweeping declarations about gun policy. It does, however, make clear that gun control research is very limited, calling on Congress to lift the NRA-backed funding freeze. It argues that this freeze has, by making it difficult to conduct better studies, led to a confusing empirical environment, where it’s easy for groups on both sides of the debate to cite shoddy work that supports their prior beliefs.

“The studies that have been done often reach opposite conclusions to each other,” Andrew Morral, the head of RAND’s gun policy initiative, told me. The lack of thorough research, he added, “creates this kind of fact-free environment in which people can cherry-pick any study that happens to support what their priors are on the effects of the law.”

Morral’s team spent two years reviewing US-based studies published over the past several decades, pulling out the most rigorous to try to find some “incontrovertible truths.” RAND concluded that, first and foremost, far more research is necessary. “Many of the matters that people disagree on when they disagree on gun policy have not been rigorously studied in ways that produce reasonably unambiguous results,” Morral said.

But there were some things that could be gleaned from the available evidence. While RAND as a nonpartisan group avoided any sweeping policy conclusions in its analysis, its review does seem to point in a direction, based on my own reading: More permissive gun policies lead to more gun deaths, while more restrictive policies lead to fewer gun deaths. Coupled with other evidence in this area, that supports the idea that more guns lead to more gun deaths. 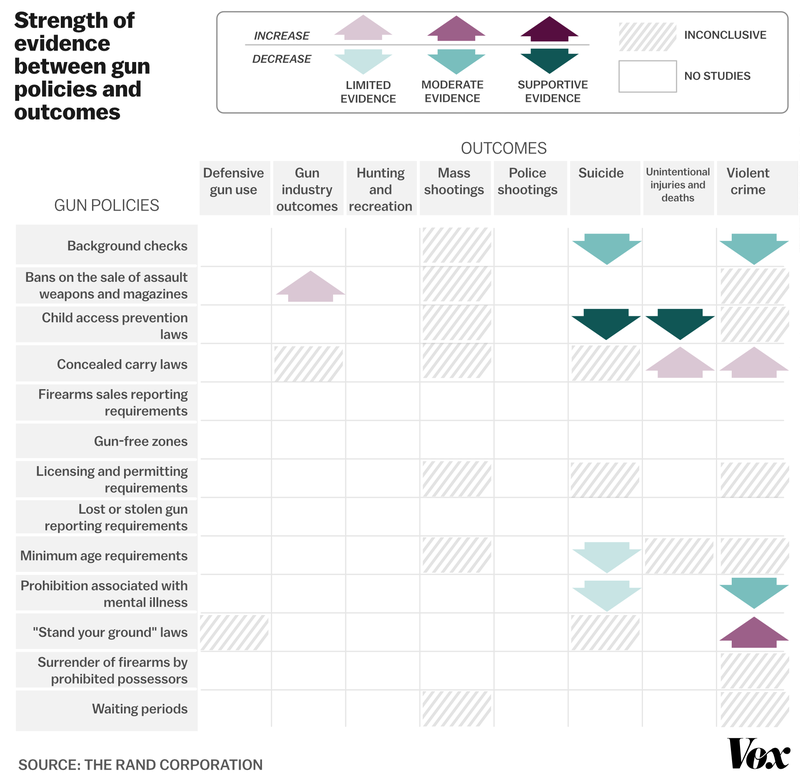 …The think tank found supportive evidence for child access prevention laws reducing suicide and unintentional injuries and deaths. And Morral agreed that the evidence is stronger on background checks and prohibitions associated with mental illness than other gun policies.

As for the correlation between gun availability and gun deaths, “RAND takes a more skeptical view. The report argued that it can be hard to disentangle the relationship between more guns and more gun deaths: Is it the abundance of guns leading to more gun deaths, or are people seeing a lot of violence in their communities and reacting to it by stocking up on guns to protect themselves? RAND concluded that there’s just not enough in the research it reviewed to solve this chicken-or-egg scenario.” In short, “more research is needed…Federal funding could go to surveys and on-the-ground research that could help address the gaps. The funding is something, however, that pro-gun groups like the NRA have worked against for years. And so far, their tactics have worked — keeping the federal freeze in place. So although there’s evidence that some gun control measures could work, we by and large remain blind to what specific solutions would work best and what all of their effects would be.”