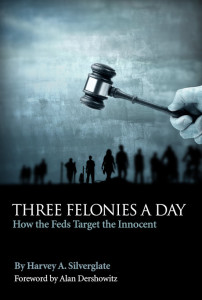 My father once told me something he had learned from an older friend who had grown up in the USSR. He said that one of the most important tools for a tyrannical government was to ensure that every citizen was always breaking the law. This was one of the benefits of the dysfunctional Soviet economy: everyone had to resort to the black market. That meant everyone was a criminal. And, since Soviet law enforcement knew that, it meant that it was entirely in their discretion to arrest you or not. When anyone can be arrested at any moment, you live in a constant state of fear.

We’re not there yet in the United States, obviously, but the rapid expansion of regulation means we might be closer than some think. In 2011, Harvey Silvergate published Three Felonies A Day: How the Feds Target the Innocent, which argued that on average, each individual American commits at least three felonies every single day without any knowledge that they are doing so.

Now Glenn Reynolds has a new paper out called Ham Sandwich Nation: Due Process When Everything is a Crime. According to the abstract:

Though extensive due process protections apply to the investigation of crimes, and to criminal trials, perhaps the most important part of the criminal process — the decision whether to charge a defendant, and with what — is almost entirely discretionary. Given the plethora of criminal laws and regulations in today’s society, this due process gap allows prosecutors to charge almost anyone they take a deep interest in.

What good is due process on a crime-by-crime basis if there are so many unknown criminal statutes that everyone can be prosecuted–successfully–for something?

3 thoughts on “Tyranny in the United States”