[This post has no real spoilers for the most recent Star Trek movie, but it does have spoilers for a lot of older Star Trek material as well as World War Z and especially the book version of Ender’s Game.] 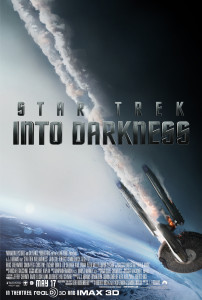 Essentially, Roddenberry envisioned a future universe in which everybody could get along; intelligent beings might have their differences, but they could still respect each other and strive to resolve their conflicts without resorting to all-out war.

[It] was completely congruent with the spirit of the original series: an enormous alien construct approaches Earth and threatens to destroy humanity, but investigation reveals that it is merely being motivated by a confused recollection of instructions that the machine absorbed when it merged with the space probe Voyager, and when it then combines with a human partner, it peacefully leaves Earth to pursue new goals.

Unfortunately, however, this movie was not very commercially successful. It was Star Trek II: Wrath of Khan that breathed new life into the franchise. And it did so by taking an empathy opponent from an earlier episode (Khan) and rendering him purely evil so that he could get blown up at the end and everyone would cheer. For Westfahl, this represents the unfortunate trend towards polarization in modern society, and it’s regrettable that it became the pattern for additional Star Trek movies (including the most recent one). I’m with Westfahl on most of this, but there are two glaring omissions that struck me as extremely puzzling.

The first is the idea that Roddenberry’s vision of the future was as optimistic as Westfahl characterizes. It wasn’t. Gene Roddenberry didn’t envision a future of various aliens existing in peace and harmony, but rather one where his preferred ideology had successfully stamped out all rivals to reign supreme. It was superficially diverse, but underneath the hood it was a philosophical monoculture. He envisioned a future for humanity where concepts like marriage, religion, and free-markets had all been consigned to the dustbin of history (thank goodness!). The result was an austere and quietly fascist society in which no life is depicted (or indeed possible) outside of the rigidly hierarchical, quasi-militaristic United Federation of Planets.

Westfahl isn’t the first person to completely miss the ominous undertones beneath the utopian ideology of Star Trek. Matthew Yglesias recently reviewed all the TV and film iterations of Star Trek for Slate, applauding the utopianism and praising Star Trek (specifically: The Next Generation) for its depiction of the “practical operation of a post-scarcity socialist economy.” Except, of course, that this is nonsense. But it’s useful nonsense, because the absolute failure of Star Trek to successfully depict a post-scarcity society (and the inability of folks like Westfahl and Yglesias to detect that obvious failure) is an object lesson in why people constantly get the politics of Star Trek backwards. 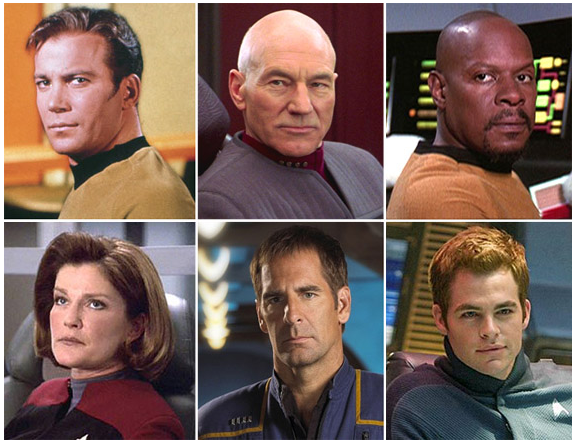 Libertarian law professor Ilya Somin actually delved deeply into the question of Star Trek’s post-scarcity socialist utopia and came away with entirely logical conclusions that would probably leave Yglesias, Westfahl, and even Rodenberry himself aghast. First, and less controversially, he dispenses with the silly notion that Star Trek depicts a world devoid of scarcity:

Some crucial raw materials, such as the dilithium crystals that power their starships clearly can’t be replicated. Same with the replicators themselves (you never see them try to replicate a replicator). Ditto for the Latinum that the Ferengi use as currency; if the Ferengi could replicate latinum at will, the currency would rapidly collapse due to hyperinflation caused by constant replication. Thus, there is scarcity in the Star Trek universe, even if many goods that are scarce today are much easier to produce for them.

This isn’t some mere technicality either, since quite a few Next Generation episodes revolve around the inability or procure this or that specific substance (even with the Enterprise-D and all her replicators sitting right there), not to mention on negotiating trade treaties between similarly advanced societies. Why would there ever be trade in a world without scarcity? It doesn’t make any sense at all. Furthermore: could the total absence of any need for trade critically undermine inter-group relationships? Now that’s a post-scarcity idea worth considering.

In any case Somin finds much darker implications behind the post-scarcity sham when he asks the simple question: “How much power does the Federation’s central government have, and how much is left to the individual planets?”

I would suggest that it is only Earth that is socialistic, while the other member worlds have free market systems or mixed economies. The human-dominated Star Fleet military is the only Federation military force, and is tasked with collecting tribute from the nonhuman planets for redistribution to Earth. But as long as they pay their taxes, which subsidize Earth’s welfare state and Star Fleet itself, they are largely left alone to govern their domestic affairs as they see fit. The Federation is essentially a big protection racket (in both senses of the word: providing external security, and also “protection” against its own depradations). There is even a good historical precedent. The 5th century BC Athenian-dominated Delian League also collected tribute from the other member states (which had no independent militaries) and used it to finance government spending on welfare benefits and the Athenian Navy, an analogue to Star Fleet. As long as the allies paid their tribute, Athens mostly left them alone and did not try to influence their domestic policies.

This theory, as Somin notes, “explains a lot”. It explains the racial exclusivity of the Federation (there’s only a single non-human admiral in the entire franchise), the absence of any civilian control over Star Fleet’s creation of foreign policy, and even the Prime Directive fits in. From this lens, even the most romantic ideal of Star Trek–exploration–takes on a sinister new meaning:

Why don’t we ever see Captain Kirk or Capt. Picard on tribute collection runs? Because the Enterprise is one of Star Fleet’s most advanced warships, and is therefore reserved for more difficult missions, such as going “where no man has gone before” in search of new wealthy star systems to occupy and tax. [emphasis added]

Now, on the one hand, I fully recognize that this is all a bit silly. Once you start arguing about Star Fleet as if it were a real-life institution in ways that have nothing directly to do with how it is presented on-scene, you can’t take yourself too seriously. I’ve only met Somin once, but I’m sure there’s a good deal of humor in his critique. He, like I, is a great fan of the franchise. The characters of the show flatly state that the Federation’s objectives (and their own personal motivations) for exploration are all perfectly ideal.

But there’s an important point to this as well: which is that the politics of Star Trek fundamentally do not work. The much-vaunted idealism is fundamentally incompatible with the actual institutions and facts as they are presented. What’s more, they’re not just non-functional, but actually have some really quite alarming consequences to the extent that you take them seriously. So, getting back to Westfahl’s original review of the new movie, he might be alarmed that it has departed from Gene Roddenberry’s vision, but that’s just because he (like Yglesias and many others) has just never really thought carefully about what that vision really entails. What would really alarm them would be to see someone actually carry out Gene Roddenberry’s vision consistently.

There’s another thing that really puzzled me about the review, however, and that is that Westfahl contrasted Roddenberry’s romantic and enlightened philosophy (real or imagined) with the polarized, tribal violence that dominates modern sci-fi movies and cited three particular examples:

I’m willing to grant some poetic license to Westfahl for the sake of trying to eek out a conveniently stark example, but this list is a head-scratcher. World War Z doesn’t illustrate his partisan point unless you think that zombies actually have a viewpoint. They don’t. World War Z is about as much an example of polarized politics as Outbreak or Armageddon or any other disaster movie. Sure, there are some stories, like I Am Legend, break the mold and depict zombies as thinking beings, but they are the exception. World War Z, which I have read, depicts the zombies as entirely non-sentient. In video game lingo, World War Z is a PvE scenario, not PvP.

I haven’t seen Elysium, nor do I know anything about it other than the trailer, so I’ll give it a pass.

But then there’s Ender’s Game. There are two thing about Ender’s Game to note right away. First: it is one of the most widely-read sci-fi stories of all time. Second: its reason raison d’être is to attack the polarized narratives that Westfahl deplores. Older Star Trek might have successful avoided falling into black-and-white morality, but Ender’s Game does far more than merely avoid the trap. Ender’s Game attacks us-vs-them mentality head on, and it makes that attack the very heart and soul of the book. 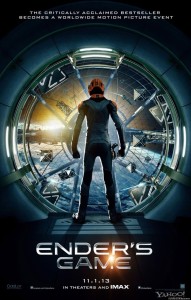 In a nutshell, the plot of Ender’s Game is that in order for Ender to save humanity and defeat the bad guys, he has to learn to understand them perfectly. But Orson Scott Card is busy promoting a philosophical idea that understanding and love are inextricable, so Ender comes to love his enemies exactly as much as he understands them. He has his greatest power over them precisely when he is most vulnerable–through his empathy with them–to that power. He cannot hurt his enemies without hurting himself. Let me say that again: Ender can’t hurt his enemies without hurting himself. And Westfahl laments this as being not as enlightened as Star Trek? In the end, Ender manages to exterminate this enemies (literally) to save humanity. But he only does that because his handlers lie and tell him that he’s still playing simulations. He would have been incapable of wiping them out if he’d known that was what he was doing. What’s more, Ender’s Game ends with Ender banished forever from Earth (so much for the typical heroic return) and subsequently writing a book to explain his enemy’s perspective called “Speaker for the Dead”. That tome become the sole scripture of a major secular religion, and subsequent generations revere the original Speaker while refering to Ender as  “Ender the Xenocide” (no one realizes they are the same person). As the anonymous Speaker, he is one of the most loved humans in history, but as Ender Wiggin he is the most despised.

This thread of love, violence, and understanding is the ultimate repudiation of polarization, and it weaves through Ender’s Game from the very first pages to the last. And yet Westfahl’s cites it among examplars of simple-minded violence? I don’t know how Westfahl, whose credits span  23 books including titles like the Greenwood Encyclopedia of Science Fiction and Fantasy, could possibly be unaware of the Ender’s Game story or its moral significance. But, then again, I’m not sure how anyone could take seriously that Star Trek depicts a post-scarcity society either. I guess some folks just can’t tell their dystopias from their utopias.

I don’t mean to hammer Westfahl too hard. I agree with his intentions. There’s definitely a sweetly romantic spirit behind Star Trek, even if it can’t withstand close scrutiny, and I’d love to see it reflected more in films. Westfahl believes that JJ Abrams is aware of this, too, and is hopeful that the third rebooted Star Trek due out in 2016 will reflect that. I’d like to see that happen, too. But if it’s an antidote to barbarity and moral absolutism that you want, you might not have to wait that long. Ender’s Game opens November 1.

4 thoughts on “What Kind of Universe is Star Trek?”