[Here there be spoilers!]

Allow me to regale you with a tale of my relationship to George R. R. Martin’s Game of Thrones. Once upon a time, long, long before most of you who watch Game of Thrones had ever heard of it, I read the first book. I was immediately impressed by Martin’s craft. The man can write, and I would never question that. But what he chose to write really rubbed me the wrong way. Specifically: I felt like the books were engineered to manufacture a sense of realism by deliberately doing horrible things to likable characters. When Ned Stark got executed at the end of the book I set it down, and I’ve never been tempted to pick up another one.

So, when all the Red Wedding stuff started breaking out over Twitter, it took me a few days enough to bother to investigate. When I eventually read a description of what had happened, I felt incredibly vindicated. And it’s not just that Martin killed off more likable characters, but it’s why he does it.

The Mirror has a couple of quotes from Martin that confirmed all my suspicions about his authorial decisions. See if you can spot the problem:

I killed Ned because everybody thinks he’s the hero and that, sure, he’s going to get into trouble, but then he’ll somehow get out of it. The next predictable thing is to think his eldest son is going to rise up and avenge his father. And everybody is going to expect that. So immediately [killing Robb] became the next thing I had to do. [emphasis added]

There is a lot that is wrong with this view, but here are the two main things.

First of all: dogmatic rejection of a thing is not superior to slavish obedience. If Martin believes that there’s this convention that the hero always wins, that belief is itself a little silly. There’s a long and established tradition of killing off pivotal, likable characters, and there’s hardly any way Martin could ever top The Sheltering Sky on that score, which actually kills the vewpoint character about half-way through. But, setting that aside, what is superior about just inverting a convention and then following that inversion lock-step? This is exactly as mature as your stereotypical mob of identical non-conformists, all non-conforming in perfect conformity. At least the conformists aren’t pretentious. 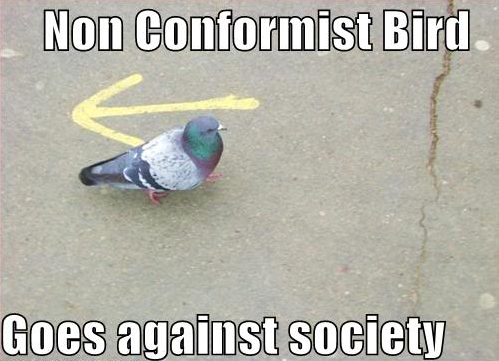 Secondly, however, the idea that you need to surprise your reader is just a complete misunderstanding of the way narrative fiction works in any medium. If surprise was essential than we wouldn’t ever re-read books or re-watch movies. Surprise is certainly an effective tool in any story-tellers toolbox and for some works it becomes the raison d’etre. Sixth Sense, anyone? But to focus myopically on surprising the audience is to basically say every movie needs to be the Sixth Sense. Do you think every movie needs to be the Sixth Sense? Because, much as I enjoyed it, I think there are lots of other kinds of movies.

Along those lines, however, Martin’s attempts at bucking traditional narrative are actually very unsurprising once you have him figured out. And his anti-conventional axe-grinding is pretty obvious from the first chapters of the book, where one of the kid characters (it’s been a while) is unceremoniously thrown from a tower and crippled. The kind of writer who does that as a bit-piece is the kind of writer who is obviously going to kill Ned, so the ending of the book was actually quite tedious in that regard. “Who’s the good guy? Yeah, they’re toast.”

More importantly, however, there are just much, much better ways to surprise your readers. One of my favorite authors is Jim Butcher, and one of the reasons I like him so much is that he never ceases to surprise me. But it’s not the kind of cheap-trick, “whatever convention dictates I’ll do the opposite” silliness. What he does is create new ideas that I hadn’t suspected at all. He’s written 14 books in The Dresden Files, and as of the most recent book he’s still doing it. I enjoy that because it’s actually creative, and not just a repetitive bait-and-switch. Butcher surprises me in ways that make me think “Why didn’t I think of that?” Besides, Martin’s trick doesn’t work.

So maybe it isn’t a trick to surprise readers or buck the narrative. Maybe it’s just “realistic”. That’s almost a whole other post in and of itself, but let me just say that striving for realism in art is like trying to make water drier. The purpose of art is to be something other than real. Plausible? Immersive? Compelling? These are all valid goals, but “realism” is not. Does randomly killing off characters to provoke a heightened sense of alarm make a work more immersive? Well, apparently so, since the books are enormously popular. Willingness to genuinely portray a starkly dangerous world is a common trait of great pop artists (Joss Whedon comes immediately to mind), but when you’re trying to establish a sense of risk by following a rote formula the whole project backfires. And, to be honest, I just have this simple question: how dark do we really want our fictional worlds to become? Darkness is as necessary to art as the color black, but when it becomes the end rather than the mean, I fear we’ve lost our way both as audience and as writer. 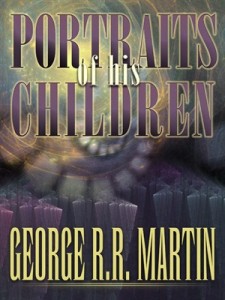 If all of this sounds like dissing Martin, it shouldn’t. I’d be thrilled to be 1/2 the writer that he is, but by far my favorite writing of his had nothing to do with A Game of Thrones. It was his novelette “Portraits of His Children”, which won the Hugo award in 1986. It’s a brilliant and touching piece that has nothing to do with swords or dragons, and is instead an introspective and intimate parable of the tradeoffs between an artist’s love for his creations and duty to his family. It follows the conventions of speculative fiction short story writing very closely, and if it doesn’t have something new to say it delivers its message in a metaphor that is beautiful, profound and–yes–new. I’m sorry the rabid popularity of the Song of Ice and Fire series means I’m unlikely to see more of that kind of writing.

Oh, yeah. And as for all you suckers who got your hearts trampled on in the last episode? Yeah: neener, neener.

3 thoughts on “To All Heartbroken Game of Thrones Fans: Neener, neener.”