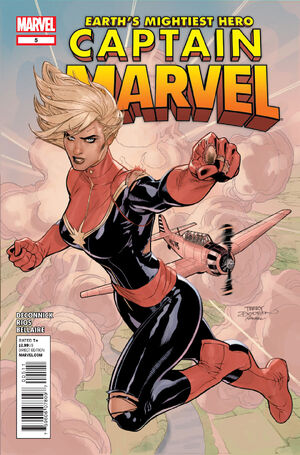 With recent rumors cropping up (emphasis on rumors!) about the possibility of Battlestar Gallactica actress Katee Sackhoff being in the running for the possible role of Carol Danvers, aka Captain Marvel, in The Avengers: Age of Ultron, feminist comic fans can have a peg to hang their hopes on. There have been a number of compelling female characters in recent superhero films, from Peggy Carter in Captain America, to Pepper Potts in Iron Man, to Catwoman in Dark Knight Rises, but even those characters had problematic elements with the portrayal of their characters. And the above characters also played chiefly supportive roles in the narrative to the male protagonist.

Things are looking a little rosier, though, with the future of the Avengers. In addition to this (albeit speculative at this point) inclusion of Captain Marvel, Joss Whedon, who has a history of writing compelling women in past projects, has already went on record about adding a little more gender diversity to the mix in the Avengers sequel, with the announcement that Scarlet Witch, one of his “favorite” characters (I think she’s fantastic, too) will be joining the team for the sequel, along with her brother Quicksilver.

If Captain Marvel really is added to the mix, too, that will make a lot of feminist Avengers fans happy about the exapanded representation. Not that Black Widow wasn’t a compelling character in The Avengers, but (with the background exception of Shield brass Maria Hill) she was looking a little lonesome without any of her Avengers sisters that are so plentiful in the comics. Granted, earlier drafts of the script by Whedon did also include the female superhero the Wasp, one of the Avengers founders, which I would have loved to see included in the final cut (she’s a very fun character). And let’s not forget that Whedon terms himself a feminist, and is record for wanting to change female representation in superhero films.

Of course, the X-Men films have had plenty of excellent heroines in their films (despite, ironically, some of the problematic elements in X-Men: First Class, regarding gender and race representation, although that can be chalked up to some commentary about it being set in the 60s), so it’s not exactly like the Avengers are tilling new ground here. What would really be pioneering the field would be to see a female superhero really be a compelling protagonist in her own film. DC Comics and Warner Brothers botched up that possibility with a speculative Wonder Woman film (they rejected the version by Whedon who, you know, made Marvel over a billion dollars with The Avengers). If Marvel can beat DC to the punch and accomplish this through a Captain Marvel movie, as Marvel producer/director Louis D’Esposito mentioned was a distinct possibility, albeit down the road a bit, then that would truly be progress. As it is, seeing women as true team players is at least a step in the right direction.

1 thought on ““Anything You Can Do…”: Feminist Superhero Revolution Starts at Marvel Films?”