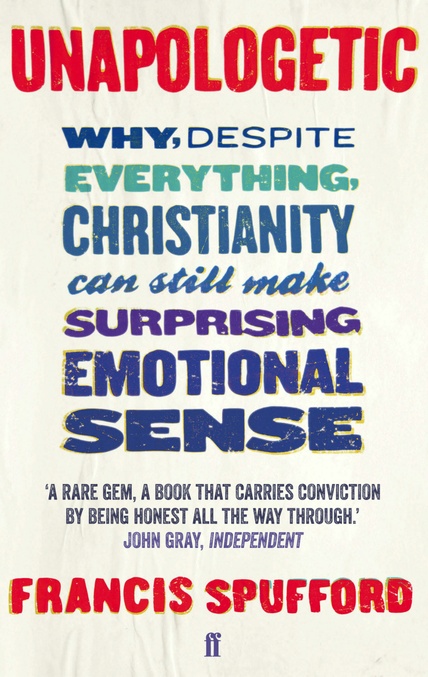 Salon is running an excerpt from Francis Spufford’s book: Unapologetic: Why, Despite Everything, Christianity Still Makes Surprising Emotional Sense, and it’s nothing short of a revelation to read. (Especially coming from Salon.) I’m quite sure I wouldn’t agree with Spufford on everything, but his ranting and raving against the shallow vanity of the New Atheists warms me to my deepest core. This is someone with whom I’m sure I would argue a very great many points, but who at some fundamental level gets it. For example (warning: some strong language):

The funny thing is that to me it’s exactly the other way around. In my experience, it’s belief that involves the most uncompromising attention to the nature of things of which you are capable. It’s belief which demands that you dispense with illusion after illusion, while contemporary common sense requires continual, fluffy pretending. Pretending that might as well be systematic, it’s so thoroughly incentivized by our culture. Take the famous slogan on the atheist bus in London. I know, I know, that’s an utterance by the hardcore hobbyists of unbelief, the people who care enough to be in a state of negative excitement about religion, but in this particular case they’re pretty much stating the ordinary wisdom of everyday disbelief. (Rather than, for example, rabbiting on about orbital teapots.) The atheist bus says, “There’s probably no God. Now stop worrying and enjoy your life.” All right then: which word here is the questionable one, the aggressive one, the one that parts company with actual recognizable human experience so fast it doesn’t even have time to wave goodbye? It isn’t “probably.” New Atheists aren’t claiming anything outrageous when they say that there probably isn’t a God. In fact they aren’t claiming anything substantial at all, because really, how the fuck would they know? It’s as much of a guess for them as it is for me. No, the word that offends against realism here is “enjoy.” I’m sorry—enjoy your life? Enjoy your life? I’m not making some kind of neo-puritan objection to enjoyment. Enjoyment is lovely. Enjoyment is great. The more enjoyment the better. But enjoyment is one emotion. The only things in the world that are designed to elicit enjoyment and only enjoyment are products, and your life is not a product; you cannot expect to unwrap it, and place it in an advantageous corner of your Docklands flat, and admire the way the halogen spots on your lighting track gleam on its sleek sides. Only sometimes, when you’re being lucky, will you stand in a relationship to what’s happening to you where you’ll gaze at it with warm, approving satisfaction. The rest of the time, you’ll be busy feeling hope, boredom, curiosity, anxiety, irritation, fear, joy, bewilderment, hate, tenderness, despair, relief, exhaustion and the rest. It makes no more sense to say that you should feel the single emotion of enjoyment about your life than to say that you should spend it entirely in a state of fear, or of hopping-from-foot-to-foot anticipation. Life just isn’t unanimous like that. To say that life is to be enjoyed ( just enjoyed) is like saying that mountains should only have summits, or that all colors should be purple, or that all plays should be by Shakespeare. This really is a bizarre category error.

But not necessarily an innocent one.

After reading this excerpt, this book is definitely on my reading list.

Also, at one point he makes reference to a Mozart Clarinet Concerto. I’m no classical music expert, but I think–based on the title and the description–that this is the one he was referring to. I’ll just leave it here for you to play when you get to that portion.

1 thought on “Unapologetic: Why, Despite Everything, Christianity Still Makes Surprising Emotional Sense”