The American Left has been instrumental in past decades at advancing the cause of equality, but their track record has been mixed. On the one hand, no one questions the morality of the Civil Rights campaign to end segregation and Jim Crow. In the 21st century racial debates tend to be about the nature of equality, but everyone in the mainstream of American life takes for granted that racial equality and integration is a good thing. The very unanimity with which interracial marriage is now accepted (just as one example) demonstrates, to my mind, the rightness of the cause. I would not say that popularity is a perfect metric of morality by any means, but I do think that acceptance of progress over a long time period is relevant to assessing the validity of that progress. 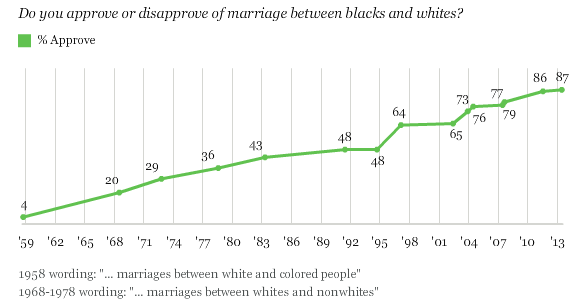 On the other hand, 40+ years after Roe v. Wade the American Left continues to try and frame the issue of abortion in terms of women’s equality and Americans–women included–continue refuse to buy it. 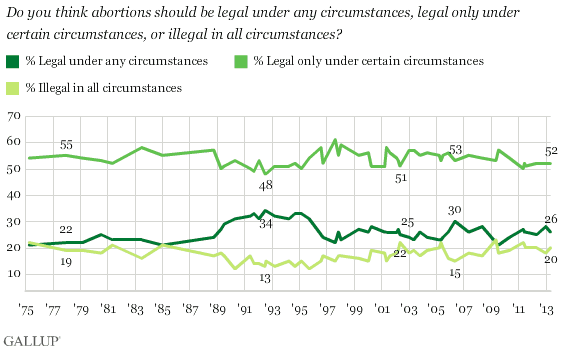 The contrast is, to me, stark and informative. On some social issues there is initial resistance followed by unanimous consent. On others, however, there is no sign of progress whatsoever. In fact, many indications are that the pro-life side is slowly gaining ground.1 Since the policy opinion is not shifting substantially, this reflects a growing awareness on the part of American citizens of just how radical and extreme our laws are. Americans are moderate on abortion, Roe v. Wade isn’t.

So the big question is: which category does gay marriage fall into?

The American Left naturally relates gay marriage to issues like interracial marriage and assumes we’ll see a chart like the one above: in 40 years time the idea of opposing same sex marriage will seem as backwards and forgotten as the idea of opposing interracial marriage. That explains the initial reaction to Phil Robertson’s comments about homosexuality: he was roundly denounced as a bigot and A&E immediately booted him from his own show (Duck Dynasty, which is the #1 non-scripted cable show of all time). Writing for the Daily Beast, Keli Goff correctly detected that this was an example of dangerous overreach:

Though nearly half of the country opposes same-sex marriage, the media narrative has become dominated by the storyline that only a small segment of backward bigots who hate gay people oppose same-sex marriage. That simply isn’t true.

Goff also points out that Robertson’s actual comments had been mischaracterized:

Despite the fact that in the next quote Robertson also quotes scripture to denounce those who commit adultery, drink too much, and slander others as sinners, he was roundly denounced as a bigot and hate monger, particularly in progressive and liberal leaning news outlets.

Just to add to that, Robertson did not equate homosexuality with bestiality. He listed homosexuality as a form of sexual deviance along with bestiality and adultery. As a confessed adulterer (before he was born again), Robertson was not calling gays sinners in any sense that didn’t include his own life as well. It’s a rare bigot who operates by painting himself and his targets with the same brush.2

Goff even calls out media bias in the language used to cover the controversy:

Reinforcing bias in reporting on this story is the fact that many outlets caved to pressure to use the term “marriage equality” in coverage, when such a term is an activist creation. Interracial marriage is called interracial marriage, not “marriage equality.” If supporters of same-sex marriage view the civil rights fights as comparable, the same language standard should be applied.

It’s obvious that the reaction to Roberton’s comments was overreach, because within days A&E had to repudiate their own position and allow him back on the show. They weren’t the only ones to misjudge public opinion on this one, either. Outlets like restaurant chain Cracker Barrel yanked Duck Dynasty merchandise, and then faced angry customer backlash. They also caved.

Now, maybe the only thing that happened is that A&E, Cracker Barrel, and others misjudged the timing of America’s acceptance of gay marriage. Maybe we’re on that upward slope of acceptance (like for interracial marriage) and in 5 or 10 years comments like Robertson’s wouldn’t generate any widespread support. But I doubt it. I doubt it because what seems to be happening is a growing awareness among many, and not just social conservatives, that there is a real and important difference between bigoted homophobia and opposition to gay marriage. Goff writes:

Among my family members who oppose same-sex marriage, I have been told to congratulate my gay friends whose weddings I have attended. But I have simultaneously been told that such unions don’t fit my relatives’ biblical definition of marriage. I have further been told that in the context of the oft repeated phrase “love the sinner, hate the sin,” they see gay people no differently than they would view a straight person like me who decides to live with someone “in sin” (as the biblical saying goes). It wouldn’t make me a bad person but one who according to biblical text would be “living in sin.” In other words, they wouldn’t throw holy water on me but also wouldn’t throw me a parade. Most of all, they wouldn’t really care how I live my romantic life at all, as long as I was happy.

There’s a big gulf between the relatives I describe and someone who “hates” gay people.

Brandon Ambrosino made pretty much the same point for The Atlantic. Ambrosino, who is gay, criticizes the argument that “if you are against marriage equality you are anti-gay.” He writes:

If it’s “anti-gay” to question the arguments of marriage-equality advocates, and if the word “homophobic” is exhausted on me or on polite dissenters, then what should we call someone who beats up gay people, or prefers not to hire them? Disagreement is not the same thing as discrimination. Our language ought to reflect that distinction.

Ambrosino then concludes: “I would argue that an essential feature of the term “homophobia” must include personal animus or malice toward the gay community.” But, as I’ve already said, Robertson seemed to be placing sexual transgressions like homosexuality in the same category as adultery, of which he is guilty and about which he speaks publicly. I do not share Robertson’s born-again take on Christianity, but I understand it enough to grasp his meaning when he talks about sin and sinners and, most importantly, so does his audience. Millions of Americans were unafraid to stand for Robertson (albeit sometimes with rather strange conceptions of the First Amendment) not because they joined with him in anti-gay bigotry, but because they clearly understood that what he had said wasn’t bigoted.

So here’s the actual graph, so far, of the American public’s opinion on gay marriage. 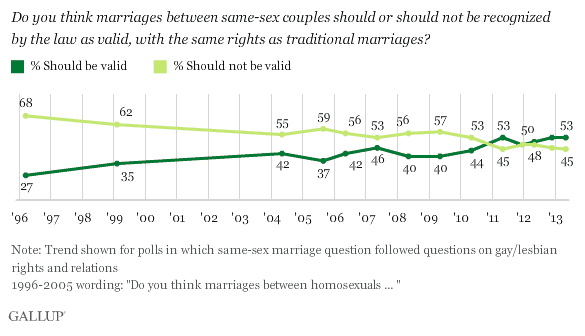 And, to be perfectly honest, I don’t have a high degree of confidence that I can predict the future on this issue either. Frankly, I suspect that the gay marriage chart will end up looking more like the interracial marriage chart than the abortion chart in decades to come. But it might not.

Goff and Ambrosino, both of whom support gay marriage, have already tacitly accepted that the gay marriage issue is not tied to broader acceptance of homosexuals as equal human beings in the same way that the interracial marriage issue is inextricable from racial inequality. You can’t logically support racial equality without supporting interracial marriage. But you can support equal rights for gays without supporting gay marriage. Race is not the same kind of identity as sexuality. This makes sense, since race is a nebulous biological category at best, but gender is much more clear cut.

The best thing that the gay marriage debate has done is force social conservatives to practice what they preach. In the 1990s and before, much if not most of the opposition to gay rights was really based on bigotry. It was based on “ick.” Conservative defenders of traditional marriage, as they style themselves, were much too slow to distance themselves from hateful rhetoric and genuine bigots. This blunder–both morally and strategically–cost them big. It may have been the deciding factor in the entire issue. Americans do not like haters.

But recently the traditional marriage movement has been sincerely careful in their articulation of a position that is anti gay marriage without being anti gay (to use Amrosino’s distinction). This distinction is obviously accepted by the broad swathe of American social conservatives, and I believe it explains the upwelling of support for Robertson better than the theory that half of Americans are just bigoted, hateful jerks. More importantly, even proponents of gay marriage like Goff and Ambrosino accept this possibility as well. All of this means that support for gay marriage may continue to climb until it reaches near-universal acceptance, or it may stall out well before that level (probably about where it is now) and become an entrenched, ongoing controversy like the abortion debate.

It’s too early to tell.

25 thoughts on “Will Gay Marriage Ever Be Settled? Lessons from Duck Dynasty”