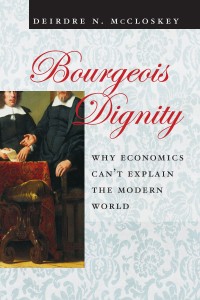 Economist Deirdre McCloskey presented a paper entitled “The Great Enrichment Came and Comes From Ethics and Rhetoric” at a New Delhi conference for the Centre for Civil Society in January. The following excerpt is, in large part, why I support markets:

Free markets, that is, have not been bad for the poor of the world. The sole reliable good for the poor, on the contrary, has been the liberating and the honoring of market-tested improvement and supply. Private charity and public works, socialism and central planning, by contrast, have often made people worse off. Yet economic growth since 1800 has almost always made them better off, by enormous factors of increase. The enrichment of the poor, that is, has not come from charity or planning or protection or regulation or trade unions, all of which, despite their undoubted first-act popularity among our good friends on the left, merely redistribute a constant or a shrunken pie. The mere arithmetic shows why. If all profits in the American economy were forthwith handed over to the workers, the workers (including some amazingly highly paid “workers,” such as sports and singing stars and big-company CEOs) would be 20 percent or so better off, right now. One time only. The 20 percent is to be compared with a rise in real wages 1800 to the present by a factor of 10 or 30 or (allowing for improved quality of goods) 100, which is to say 900 or 2,900 or 9,900 percent. If we want to make the non-bosses or the poor better off by a significant amount, 9,900 percent beats 20 percent every time. At 5 percent per year market-tested improvement and supply goes beyond the one-time 20 percent in a scant four years, and then cumulates to a quadrupling.

Check it out. The third volume of her trilogy on the Bourgeois Era- (the 2nd of which is pictured above)-The Treasured Bourgeoisie: How Markets and Innovation Became Virtuous, 1600-1848, and Then Suspect–will be out in 2015.

3 thoughts on “The Great Enrichment”