Twice a  year the Church of Jesus Christ of Latter-day Saints holds a General Conference, which consists of 4, 2-hour meetings for the general membership of the Church to attend at the giant conference center in Salt Lake, at church buildings around the world, or even from home via Internet and other sources. In addition to the general membership meetings, there is a Priesthood meeting for men and boys 12 or older and a combined meeting for women and girls as young as 8. Last year, at the Fall General Conference, the feminist Mormon group Ordain Women staged a protest at the male-only meeting. OW seeks to have women ordained to the Mormon priesthoods (there are two orders), but their request was denied and they were barred entrance. The incident made headlines, which seems to have been the purpose.1

OW plans to repeat their action again at the upcoming April General Conference, and this has provoked a preemptive response from the Church. An official statement that was released to the public makes two important statements. First, it states that male-only ordination to the Aaronic and Melchizedek priesthoods is “a matter of doctrine.” This draws a deliberate contrast with the racial priesthood ban which the Church rescinded in 1978 and further repudiated in a statement earlier this year. That practice was never based on any canonized revelation, and is now2 viewed as a matter of policy (transient) as opposed to doctrine (permanent). The new statement even went farther and specifically disavowed the folk theology that had grown up around this policy: “None of these explanations is accepted today as the official doctrine of the Church.”

This new statement on race and the priesthood is part of a major, but quiet, new initiative in how the Church talks about its own history and other sensitive issues. It is, in that sense, a sign of progressiveness in the Church. I, and many others, applauded the document when it came out. So it is very telling that the Church chose to refer to this document (however obliquely) in their response to OW. Referring to a new, progressive document conveys the message, “This far, and no farther” more powerfully than a reliance on an older or more traditional source would.

Which brings us to the second, and more controversial, statement:

If you feel you must come and demonstrate, we ask that you do so in free speech zones adjacent to Temple Square, which have long been established for those wishing to voice differing viewpoints.

The formal statement has drawn headlines of its own weeks ahead of the OW demonstration. Kate Kelly, the founder of OW, is quoted in the Salt Lake Tribune as stating flatly:

We have nothing in common with those people [referring to other demonstrators in the free speech zone]. They are seeking to destroy the church. We are not against the church — we ARE the church.

The idea that the Church has chosen to ostracize OW members is widely seen by supporters of OW as victory for their movement. A raft of blog posts from prominent Mormon women, like Jana Riess, have come out stating that the Church is behaving like a bully. Riess writes:

There is something deeply symbolic about yesterday’s statement, for it reveals what the Church apparently thinks of the feminists within its fold. We, as faithful and active members of the Church, are being lumped together with the same anti-Mormon protestors who routinely crash General Conference and shout that the Mormon religion is of the devil. These protestors have started fistfights with conference-goers and even stomped on or burned temple garments.

In line with characterizations like these (although not necessarily as an endorsement of them)3, Kristine Haglund, another prominent Mormon feminist, called the decision a “PR disaster for the church.” She went on o say that “Goliath is never going to get better press than David — the optics are terrible.” That’s all I intended folks to glean from her quote, that it was a bad PR move, but I [/ref] On Facebook I’ve seen friends express similar twin feelings of deep hurt at being excluded along with a sense that soon the tide will turn in their favor and the members of the Church will come to see OW as the good guys. I think both of those reactions are mistaken. 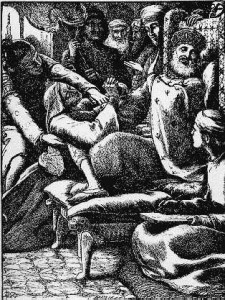 First, while my heart goes out to those who feel stunned and betrayed by this announcement, I’m afraid they may have set themselves up for tragedy. The movement for female ordination often models their approach on scriptural precedents like the parable of the importunate widow, but this is a very high-risk approach to activism. But this parable is problematic for a couple of reasons. First, it is about a widow and therefore someone who self-evidently has a valid claim.4 Is it “self-evident” that we ought to ordain women? Obviously most Mormons don’t think that it is. Second, it seems like a serious mistake to apply the parable to conventional PR pressure tactics targeting the leaders of the Church instead of prayer to God. I’m not suggesting that OW should only pray about this and nothing more, but I am suggesting that enlisting this parable as a justification of conventional protests is a mistake. Unfortunately both these elements, the believe that female ordination is self-evident and also the belief in scriptural justification for their tactics mean that OW may have not really prepared themselves for the possibility that the Church simply isn’t going to go their way. I’ve often seen Mormon feminists pronounce total confidence in both the rightness and the inevitability of their cause. In light of such great expectations, there is simply no way that the Church could offer a definitive “no” that would not feel crushing.5

Meanwhile, however, Mormon feminists often do not seem cognizant of the fact that their requests would cause just as much pain to fellow members as they themselves feel today. If they feel excluded by this statement, imagine how categorically and totally traditional Mormons (who vastly outnumber Mormon feminists) would feel were the Church to repudiate their faith and their convictions by instituting female ordination. There genuinely are two sides to this issue, and those who oppose female ordination frequently do so because of their own equally sincere convictions about what it means to be a Mormon woman. I understand that being asked to stand next to anti-Mormons may feel like symbolic ostracism. Does OW understand the extent to which, if their requests were granted, huge numbers of Mormons would feel just as betrayed? It may be asking too much while the sting is still fresh, but feelings of hurt and betrayal should eventually be examined in this context. This story ends with broken hearts, no matter how it ends.

Second, and for a great many reasons, I do not think that the Church’s statement will result in a significant shift in Mormon perception of OW. It’s important to step back and realize that OW does not even speak for all Mormons who feel dissatisfied with the status quo as it relates to the priesthood and gender issues broadly defined. As I’ve written before, the word “conservative” takes on strange connotations in a religion that is dedicated to ongoing revelation. Mormons believe in a Heavenly Mother, but we know very little about Her. Mormons believe that there are other scriptures beyond the Book of Mormon, but we don’t have them yet. We believe that God “will yet reveal many great and important things pertaining to the Kingdom of God.”6 In a broad vista of possible futures, the movement to ordain women to the Aaronic and Melchizedek priesthood orders is one tiny possibility that does not have broad support even among Mormons who look for forward to further light and knowledge.7 In fact, one of my chief disagreements with OW is precisely that it seems completely deaf to the possibility of a genuinely new and uniquely Mormon resolution to the questions it raises, seeing instead only the conventional secular redress.

What’s more, however, the Church’s statement isn’t in any way a proactive attack on OW itself or its members. This is not some kind of sequel to the September Six. As quick as folks are to draw comparisons with the civil rights struggle and other forms of oppression and persecution, the Church has actually done nothing as it relates to OW generally. It has only specified that if you want to come to Temple Square for the purpose of protesting the Church General Conference you have to do so in the area that has been designated for that purpose. In other words, the statement does intimate that the aim of OW runs counter to the doctrine of the Church, but the only action the Church is taking is a specific, limited, response to a single, contained tactic of OW that causes even generally supportive Mormons consternation. This is not the stuff of which martyrs are made.

Mormonism is an incredibly open-minded faith because of its atheological nature, and I do not believe that the statement from the Church presages an offensive against Mormon feminists in general or even specifically against OW. Lots of Mormons believe lots of things, and lots of Mormons think that other Mormons are crazy for the things they believe.8 When it comes to behavior, we’re a pretty rigid Church, but when it comes to philosophy it’s pretty much every man or woman for himself. And I like it that way. I like the big tent approach to philsophy coupled with firm stances on ethical actions. But there is a difference between “all people are welcome” and “all ideas are accepted.” No matter how much we as individual members may love our Church, it is ultimately not up to us to define what the Church believes. It isn’t really our Church at all. Every religious tradition must decide for itself which beliefs are essential, which beliefs are somewhat optional, and which beliefs are banned.9

I certainly don’t want to get out ahead of the prophets and declare this answer conclusively resolved based on one sentence from one public relations statement. So I am not going to try and argue that the Church’s position on female ordination is as central as, for example, the divinity of Christ or the Atonement. It isn’t, and it never can be. But I do think that proponents sometimes fail to appreciate the extent to which a commitment to gender essentialism and traditional gender roles is a deep part of our culture, history, and doctrine. Unique teachings that define Mormonism, like the centrality of the family to exaltation, are inextricable from teachings like gender complementarity. These beliefs have been reaffirmed recently with the proclamation on the family. And they seem to be at odds with OW’s particularly severe and uncompromising vision of gender egalitarianism.

There will always be some members of faith traditions who find their treasured convictions on the wrong side of the boundaries of their faith. That is an awful predicament to find oneself in. Historically, some in that position have ultimately been in error, but sometimes it is their particular faith tradition that has made mistakes. (Sometimes both, of course.) That is why, even if the Church gets increasingly explicit about male-only ordination as a matter of essential doctrine, I will sympathize with those who cling to their beliefs and their conscience. I think they are wrong, but (in this possible future) I hope that all those who find themselves in that position realize that they are loved and wanted and welcomed even if one or more of their beliefs have been categorized as out of bounds. I hope they find a way to live with the tension between their competing beliefs (a tension we all feel to some extent at different points in our lives) and remain within our community.