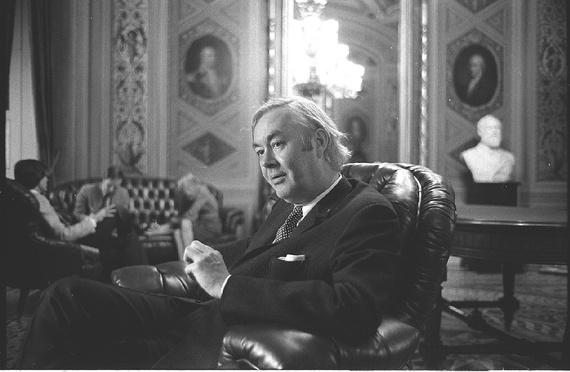 The Atlantic has an interesting historical piece on the Moynihan Report by Peter-Christian Aigner, who is writing a biography on Moynihan. The piece looks at Moynihan’s actual politics and motivations behind his now (in)famous report and reveals some surprises for both the Right and the Left:

If [the Right] knew what policies Moynihan hoped to spur with his report, they might view him as a Marxist radical to be forgotten, not a visionary martyr to remember. Moynihan stated these goals more than a few times, but new documents from his rich archive give a much fuller, clearer, and bolder illustration of his thinking and hopes.

“With a background in the labor movement and New York state government,” Moynihan “became convinced that poverty amid prosperity was not a “paradox,” as most said in the 1960s, but an inevitable result of the market’s “creative destruction.”” The author describes Moynihan as being influenced by “Catholic social doctrine and European policy thinkers,” causing him to worry “that America’s deep-seated individualism created a “values” framework that inclined the nation too easily to social Darwinism.” For Moynihan, “jobs ought to be a “right,” not a scarcity.” Moynihan was “particularly impressed by Sweden’s cradle-to-grave welfare state” as well as “the “family allowance” (cash transfers used to bolster low wages).”

But JFK and LBJ were not interested in committing large government resources to such policies, and Moynihan lost his biggest fight, to get these ideas into the War on Poverty. That’s when he decided to write “The Negro Family.” Originally, he included the two policy recommendations. But fearing Johnson would reject the memo outright, he chose in the final report to just emphasize poverty’s cultural devastation alone, using apocalyptic and occasionally controversial language. The central message of the 78-page document was that more than 200 years of the “worst” form of slavery in history, and nearly a century of Jim Crow and Great Depression levels of unemployment and poverty had nearly destroyed the black community. So great was the damage that now even the basic unit of society, the family, was coming apart.

The author notes that “years of research have confirmed his suspicion: break-up can indeed be a trigger for poverty, although it is most often a correlate, not a cause. More typically, as he suggested, the relationship is the other way around: Money problems exacerbate the difficulties of marriage and child rearing.” In conclusion, “Moynihan was genuinely concerned about family break-up and its results, but his understanding of the problem and solutions were radically different from that of the right today.”

While I think the author grossly and demonstably misinterprets the research over the past several decades on family structure and poverty,1 the historical context and background of the Moynihan Report is important. Check out the full article.