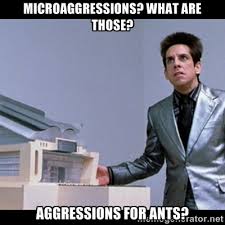 Social psychologist Jonathan Haidt has an engrossing outline of a fairly new study on what are known as microaggressions. The study examines our transition into a moral culture of victimhood. The 18th and 19th centuries saw a shift from cultures of honor to cultures of dignity. Honor-based cultures tend to lack strong legal authority and institutions, thus socializing individuals to rely on their own bravery and capabilities to avenge insults and consequently earn honorable reputations. Dignity-based cultures see the worth of individuals as inherent rather than bestowed by public opinion. This moral paradigm is reinforced by the reliance on third parties (i.e., police or courts) for egregious offenses, though frivolous use of authority is often condemned and a general “thick-skinned” approach to insult is the standard. This emerging culture of victimhood combines the sensitivity to insult of honor-based cultures with the reliance on third parties from dignity-based cultures. Sympathy is preferred to honor and victimization is emphasized rather than inner strength and worth. The status of the “virtuous victim” has risen to the point of creating competition for the coveted title of most oppressed. This leads to the reporting (and fabrication) of slight offenses toward marginalized groups (i.e., microaggressions). Yet, this publicizing of microaggressions often takes place in already highly egalitarian, diverse, and affluent pockets of society with strong administrative bodies (such as university campuses). As progress is made toward increased equality and diversity, the standard for offense paradoxically drops. In other words, the richest, most equal, most diverse societies in the world will make the loudest denunciations for the smallest possible offense (whether actual or not).

It’s an absolutely fascinating read and an incredible insight into our current culture.

2 thoughts on “The Moral Psychology of Microaggressions”