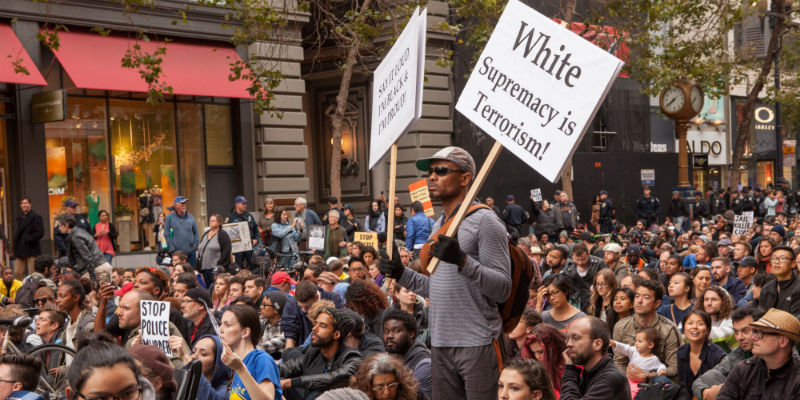 When Russell Fox highly praised an article with the headline The Defense of Liberty Can’t Do Without Identity Politics, I knew I had to read it. Between his praise and the tagline of the site–“moderation in pursuit of justice”–I was fascinated to see what a fusion of classical liberalism and identity politics might look like. As it turns out, however, it’s not an alliance that I can see any hope for.

The first indication that things were going awry was author Jacob Levy’s dismissal of the Trump win as not even really needing an explanation:

Donald Trump received a smaller share of the popular vote than Mitt Romney did in 2012, but his Electoral College victory was so unexpected that it seems to call forth explanation after explanation.

The idea is that Trump’s apparently overwhelming victory is basically a figment of the peculiar nature of our voting system. In reality, it was about 80,000 votes in three states 1 that proved decisive, and such a small number of votes “is susceptible of almost endless plausible explanations.”

All of which is true. And all of which misses the point entirely. When someone as objectionable as Donald Trump performs about as well as your typical Republican candidate, that is not a reason to wave your hands dismissively. That is a matter for serious reflection, because Trump was far, far from a typical Republican politician. Levy seems to be saying that Trump did more or less as well–plus or minus an insignificant fraction of total voters–as anybody else would have: Jeb Bush, Marco Rubio, Mitt Romney, whatever. But that’s not an explanation of anything. It actually happens to be the very fact which demands an explanation!

The second misstep is fundamentally misconstruing the nature of political correctness. To hear Levy tell it, identity politics is basically indistinguishable from civility and common moral rectitude. Thus, Levy insists that Trump’s low points such as the attack on Judge Curiel or the Khan family or the Bobby Bush video, were all instances of Trump violating political correctness. Ergo, Trump did not rise when he contravened identity culture, but rather fell, and so you can’t credit any kind of anti-PC sentiment for his victory.

Speaking more broadly, however, Levy’s dismissive attitude towards the excesses of political correctness and identity politics fundamentally misapprehends what that movement is already about. On the issue of college campuses, he writes:

It turns out that 18-year-olds seized of the conviction of their own righteousness are prone to immoderation and simplistic views. (Who knew?)

But–as amusing as those stories are–he neglects the part where people lose their jobs as a result of these temper tantrums and how this very real threat has led to a climate of fear and paranoia.3 Nor is that just a matter of anecdotes. In “Political diversity will improve social psychological science” a team of researchers4 substantiate the following claims:

So much for the kids will be kids approach Levy favors. Undermining free speech and open inquiry on collage campuses and beyond strikes me as a legitimately concerning trend, not just a kind of cute overzealousness..

Levy also characterizes identity politics as starting and ending with any particular concern for a particular group of individuals. Anti-sodomy laws used to discriminate gays can be written in apparently neutral terms (with regard to sexuality) and America’s racist criminal justice system is ostensibly colorblind. In order to reform these discriminatory systems, Levy insists, we have to have identity-conscious politics that refuse to give up at the most superficial veneer of impartiality.

I agree with Levy on this point,5 but what we agree on and what identity politics constitute are two different things. Take the criminal justice system, for example. The inequality is evident in statistics that indicate blacks and whites use drugs at roughly equivalent levels, but that blacks are more likely to be arrested, charged, charged with more serious offenses, and convicted. It is entirely possible to oppose this because you want blacks and whites to be treated identically. This is nothing new. It’s the same spirit–broadened and expanded–as “all men are created equal.”

But what does this have to do with the doctrine of intersectionality, a political idea rooted in the fundamental alienation of people based on categories of race, gender, and sexuality? How can a universal view of humanity where we’re all fundamentally alike–and should be treated that way–possibly coexist with a doctrine that takes as axiomatic the mutual incomprehensibility of our lives based on identity categories?6

What does this have to do with the stubborn insistence of contemporary social justice warriors–many of whom come from extremely privileged backgrounds (as their prevalence on elite college campuses renders obvious)–to insist we check our racial privilege while ignoring other forms of privelege that are at least as relevant but would indict them as well? (I’m looking at you, socio-economic class.)

Or, to expand things a bit more, let’s consider critical race theory which–according to its own proponents–“rejects the traditions of liberalism and meritocracy.”7 Levy argues that “the defense of liberty can’t do without identity politics,”8 but it turns out that the actual practitioners of identity politics think they can get along without liberty (at least: classical liberalism) just fine, thanks very much. Levy might think he’s on the side of the politically correct and the social justice advocates of identity politics, but I’m pretty sure the feeling’s not mutual.9

Aside from these particular ideological incompatibilities between classical liberalism and identity politics, we also have research from Bradley Campbell and Jason Manning delving into the rise of “victimhood culture” as something genuinely new and unique, using the same kinds of instances Levy dismisses as insignificant to illustrate “large-scale moral change” and the rise of a distinct victimhood culture. The only other two moral cultures they identify are honor culture and dignity culture, so it’s not like we get a new one of these every decade or so. This shift is seismic.

In the end, Levy believes that identity culture and classical liberalism can be allies. And, insofar as what he means is that “the progress of freedom depends on those who know where the shoe chafes,”10 then I agree. The trouble is that the identity politics of today–however they started–are effectively a method of entrenching socio-economic inequality by diverting attention away from the privileges of wealth and elite education with a myopic emphasis on race, gender and sexuality that–while sometimes vital in specific cases–becomes in its myopic form a tool of oppression rather than of freedom. Fundamentally, the project of contemporary identity politics both historically unique and essentially anti-liberal.