UPDATE: Although this post was published on August 24, 2017, it was written weeks ago. Notably, before Charlottesville. I’ll be writing a followup in light of recent events for the near future.

Despite the fact that overt, explicit racism is widely rejected and condemned within the United States, racially disparate outcomes remain endemic. One particular blatant example of this is the racially unequal justice system we have in this country. In super-short terms, blacks and whites use illegal drugs at about the same rates, but black people are more likely to be arrested, charged with more serious crimes, and serve longer sentences than whites.1

Contemporary definitions of racism–of which there are basically two–attempt to explain why America continues to be a place with racially unfair outcomes even though overt racism has long since been marginalized. The first contemporary definition of racism is about systematic racism. According to this definition, prejudice is a feeling of animus against a person/people based on their race, discrimination is unequal treatment stemming from prejudice, and racism is an attribute of social systems and institutions where prejudice and discrimination have become ingrained. Accordingly, America can be a white supremacy without any white supremacists, because the overt prejudices of the past have been absorbed into our institutions (like the criminal justice system) and have taken on a life of their own. If the system is racially biased, then even racially unbiased people are not enough to get racial justice. It would be like playing a game with loaded dice. Even if the other players are 100% honest, their dice are still loaded, and so the outcome is still not fair. If you accuse them of cheating, they will be defensive because–in a sense–they are playing the game honestly. But as long as their dice are loaded (and yours are not), the game is still rigged.

Second, we have the idea of implicit racism. This is the idea that even people who really and sincerely believe that they are not racist may harbor unconscious racial prejudice. This is based on implicit-association tests and the theory that tribalism is basically hard-coded in human beings. These two findings–the empirical results of implicit-association tests and theories about the innateness of human tribalism–are not necessarily connected, but they come together in a phrase you’ve almost certainly heard by now: “everyone is racist.”

So far, so good. Both of the new definitions (which are not mutually exclusive) provide promising avenues to understand ongoing racial disparity in the United States and seek to redress it. But this is where we run into a serious problem. As promising as these avenues might be, they certainly take us onto more ambiguous and complex territory than civil rights struggles of the past. The more overt racial injustice is, the simpler it is. Slavery and Jim Crow are not nuanced issues. But now we’re talking about how to fight racism in a world where nobody is racist anymore (at least not consciously). And just when things start to get tricky, the problem of perverse incentives rears its ugly head.

Perverse incentives are “incentives that [have] an unintended and undesirable result which is contrary to the interests of the incentive makers.”2 In the fight against racial injustice there are basically two kinds of perverse incentive: institution and personal.

Institutional perverse incentives arise whenever you have an institution with a mission statement to eliminate something. The problem is that if the institution ever truly succeeds then it is essentially committing suicide and everyone who works for that institution has to go find not only a new job, but a new calling and sense of identity.

If conspiracy theories are your thing, then it’s not hard to spin lots of them based on this insight. Instead of fighting poverty, maybe government agencies perpetuate poverty in order to enlarge their budgets, expand their workforces, and enhance their prestige. But you don’t have to go that far. In practice, it’s far more likely that an institution dedicated to ending something will have two simple characteristics. First, it will exaggerate the threat. Second, it will be studiously uninterested in finding truly effective policies to combat the threat.

An agency that does this will successfully satisfy the economic and psychological self-interest of the people who who work for it. Economically, the bigger the threat the bigger the institution to oppose it. This is true regardless of whether we’re talking about a government agency arguing for a bigger slide of taxpayer revenue or a non-profit appealing for donations. Psychologically, the bigger the threat the easier it is for the people who work in the institution to feel good about themselves and not think too hard about whether or not they are really picking the most effective tools to eliminate whatever they’re supposed to be eliminating. In short: institutions that oppose a thing will gradually come to be hysterical and ineffectual because that’s in the best interest of the people who run those institutions.

This may sound all very hypothetical, so let me give you a specific example: the Southern Poverty Law Center. Politico Magazine recently came out with a very long article titled Has a Civil Rights Stalwart Lost Its Way? which makes a lot of sense when you keep the perils of perverse institutional incentives in mind as you’re reading it.  The article points out that the SPLC has “built itself into a civil rights behemoth with a glossy headquarters and a nine-figure endowment, inviting charges that it oversells the threats posed by Klansmen and neo-Nazis to keep donations flowing in from wealthy liberals.”3 It also notes that the election of Trump–while ostensibly bad for anti-racism efforts in the US–is unquestionably great for the SPLC, “giving the group the kind of potent foil it hasn’t had since the Klan.” So no, this isn’t just hypothetical theorizing. It’s what is happening already, to one of America’s most legendary anti-racism institutions.

The second set of perverse incentives are personal and basically class-based. Both the systematic and implicit definitions of racism evolved on elite college campuses, and the anti-racist theories that are based on these definitions are correspondingly unlikely to successfully reflect the interests and concerns of the genuinely underprivileged. They may be about the underprivileged, but they are adapted to–and serve the interests of–elites.

Consider first the case of a hypothetical young black man with a solidly middle- or upper-class background. Henry Louis Gates, Jr. observed that “the most ironic outcome of the Civil Rights movement has been the creation of a new black middle class which is increasingly separate from the black underclass,” and a 2007 PEW found that nearly 40 percent of blacks felt that “a widening gulf between the values of middle class and poor blacks” which meant that “blacks can no longer be thought of as a single race.” Thus, this young man faces a sense of double alienation: alienation from lower-class blacks and alienation from upper-class whites. Placing emphasis exclusively on the racial component of social analysis obscures the gulf between lower- and upper-class blacks and offers a sense of racial solidarity and wholeness. At the same time, it denies the actual privilege enjoyed by this person (after all, his neighborhood is not crime ridden and his schools are high-functioning) and therefore eases any sense of conflict or guilt at his comparative fortune.

The case is simpler for a hypothetical young white man with a privileged background, but (since this person enjoys even more advantages) the need for some kind of absolution is even more acute. Propounding the new definitions of racism allows low-cost access to that absolution. For an example of how this works, consider how the hilarious blog-turned-book Stuff White People Like discussed white people’s love of “Awareness.”4 Stuff White People Like notes that “an interesting fact about white people is that they firmly believe that all of the world’s problems can be solved through “awareness.” Meaning the process of making other people aware of problems, and then magically someone else like the government will fix it.” The entry goes on: “This belief allows them to feel that sweet self-satisfaction without actually having to solve anything or face any difficult challenges.” Finally:

What makes this even more appealing for white people is that you can raise “awareness” through expensive dinners, parties, marathons, selling t-shirts, fashion shows, concerts, eating at restaurants and bracelets.  In other words, white people just have to keep doing stuff they like, EXCEPT now they can feel better about making a difference.

So we’re at a time when the complexity of racial injustice in the United States calls for new and nuanced definitions and theories of racism at precisely the time when–due to the past successes–the temptation to exaggerate racism and ignore effective anti-racism policies is also rising. The result? You might have a Facebook friend who will pontificate about how “everyone is racist” one day, and then post an image like this one the next: 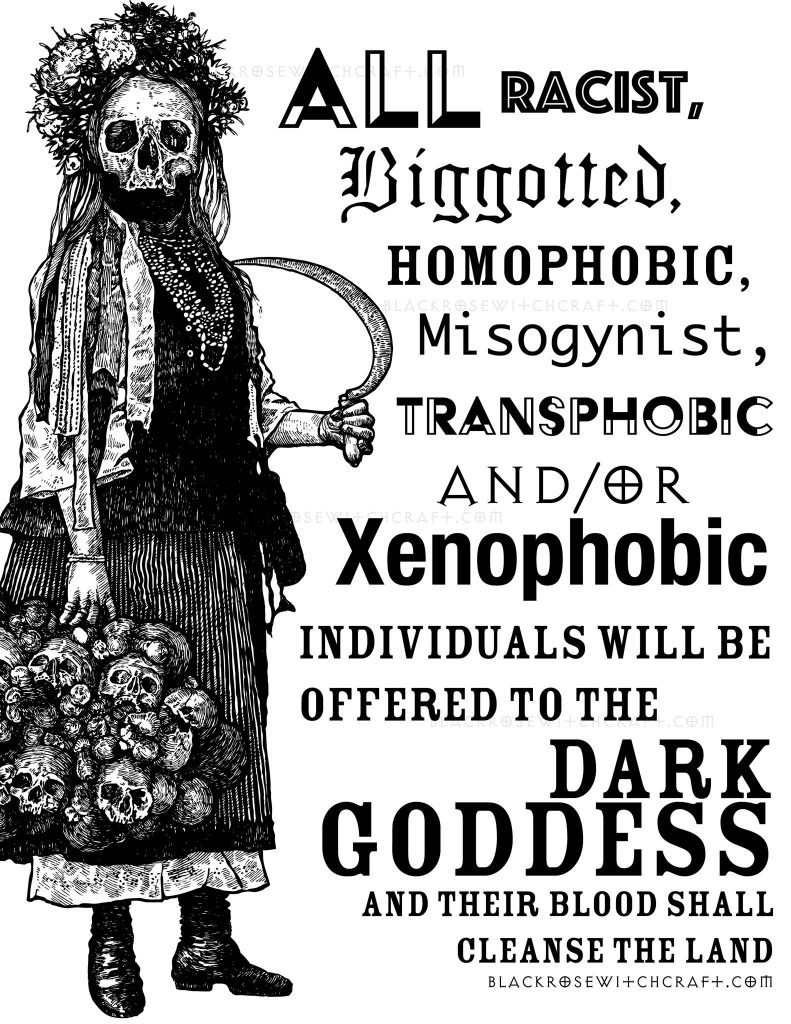 So, you know, “we’re all racist” and also “if you’re racist, you deserve to die.” No mixed messages there, or anything.

Speaking of implicit bias, by the way, the actual results of Project Implicit’s testing are that nearly a third of white people have no racial preference or even a bias in favor of blacks. Once again, this doesn’t prove that racial justice has arrived and we can all go home. That’s absolutely not my point. It’s just another illustration that simplistic narratives about white supremacy don’t work as well in a post-slavery, post-Jim Crow world. The serious problems that remain are not as brutally self-evident as white people explicitly stating that the white race is superior.

Just to toss another complicating factor out there, researchers compared implicit bias to actual outcomes in undergraduate college admissions and found that despite the presence of anti-black implicit bias, the actual results of the admission process were skewed in favor of blacks rather than against them:

When making multiple admissions decisions for an academic honor society, participants from undergraduate and online samples had a more relaxed acceptance criterion for Black than White candidates, even though participants possessed implicit and explicit preferences for Whites over Blacks. This pro-Black criterion bias persisted among subsamples that wanted to be unbiased and believed they were unbiased. It also persisted even when participants were given warning of the bias or incentives to perform accurately.

If implicit bias can coexist with outcomes that are biased in the opposite direction, then what exactly are we measuring when we measure implicit bias, anyway?

I believe that both of the new definitions of racism have merit. The idea that institutional inertia can perpetuate racist outcomes long after the original racial animus has disappeared is reasonable theoretically and certainly seems to explain (in part, at least) the racially unequal outcomes in our criminal justice system. The idea that people divide into tribes and treat the outgroup more poorly–and that racial categories make for particularly potent tribal groups–is equally compelling. But the temptation to over-simplify, exagerate, and then coopt racial analysis for institutional and personal benefit is a genuine threat. As long as it’s possible to cash-in on anti-racism–financially and politically–then our progress towards racial justice will be impeded.

I am, generally speaking, a conservative. I don’t, by and large, share the worldview or policy proscriptions of those on the American left. But I do care about racial justice in the United States. I believe that the current discussion–or lack therefore–is significantly hampered by the temptation to profit from it. And I figure hey: maybe by speaking up I can contribute in a small way to shifting the conversation on race away from the left-right political axis and all the toxicity and perverse incentives that come with it.

3 thoughts on “The “Everyone is Racist” Quagmire”